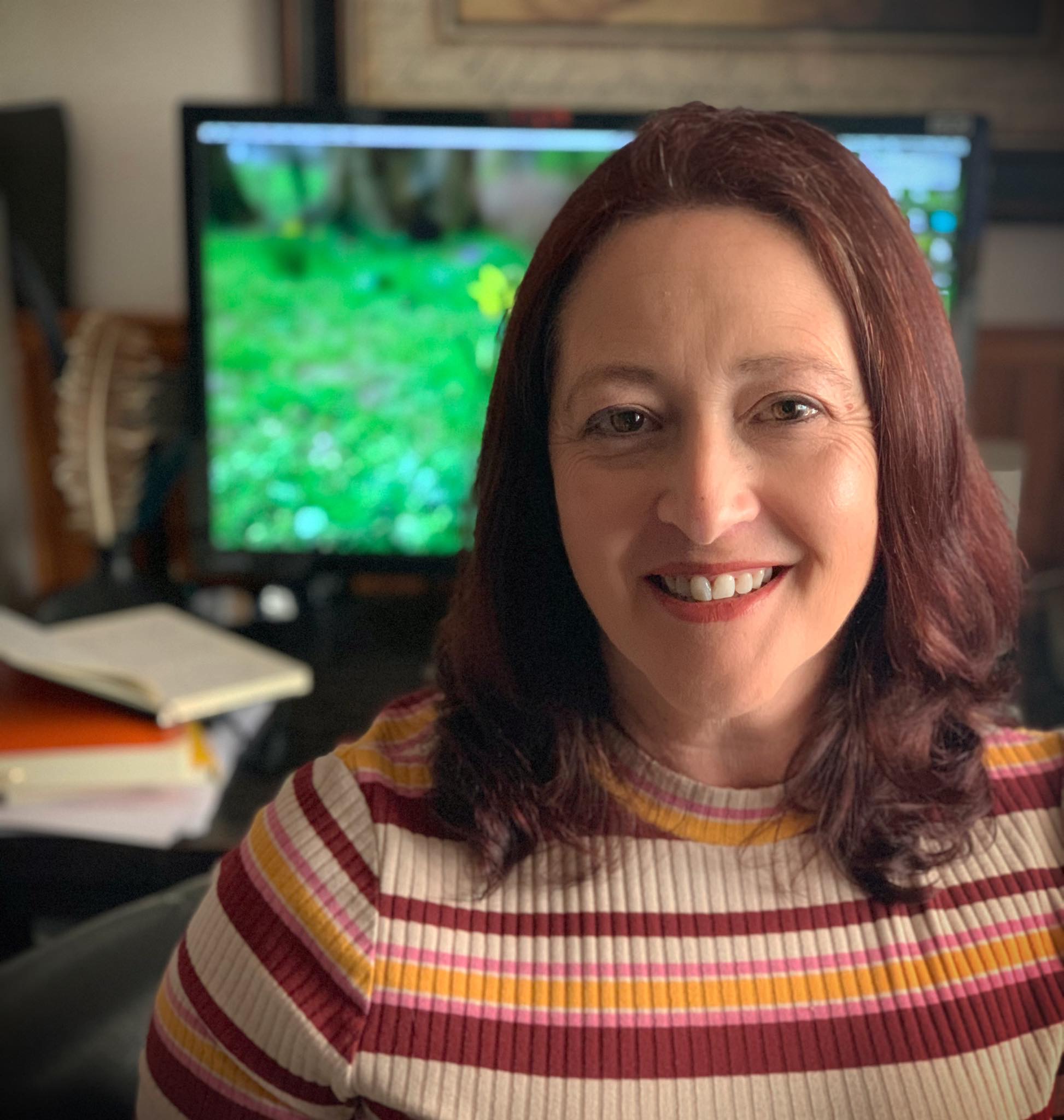 Reading And Writing One’s Way Through The Lockdown - Jackie Anderson

The lockdown has been a bit of an experiment for many of us - cut off from the routines of work, walking up Main Street and going out for meals or to socialise, we’ve suddenly got hours to spare, a kind of bizarre freedom.

Although Jackie often works from home and “sitting on the sofa in PJs with a laptop is not entirely unusual” for her, she has had empty hours to fill in the last few weeks.

“My days felt longer initially, but oddly enough, for someone who craves some down time to be able to get stuck into being creative, I found it hard to focus at first. I tended to fill my hours with attempts at decluttering and more home cooking but even then my mind would flitter about and I felt hugely unsettled, unable to concentrate on anything for long,” she says.

Jackie explains that this sense of unease is a common reaction to what is effectively a shared trauma: “We are all experiencing varying levels of anxiety from fears for our own health and our futures, to worries about members of our families and our wider community.”

One problem people encounter when faced with so many hours indoors is the pressure to use the extra time to do something life-changing or productive.

Jackie said she felt this but brushed it aside to focus on her writing:  “I had a spate of feeling guilty that I was not watching live streamed musicals or Shakespearean productions, nor contorting my limbs in a futile effort to learn yoga, nor embarking on an online crash course in Kentish Old English. And then I decided that since the only thing I do reasonably well and doesn't feel like an effort is write.”

Since then, Jackie has been putting in a couple of sessions a day, balancing her creative output with work assignments, chores and walking the dog and focusing on projects she’s “planning out for ages” but which have been delayed due to a lack of time in the pre-Coronavirus days.

Still, she feels she’s been “less creative” - “I would like to say that I have poured my thoughts, feelings and anxieties into reams of words during this lockdown period, but I haven't. In fact, while I have had a few moments of inspiration, I have been less creative than usual. Down time is important for creativity - you need to be able to switch off from the mundane and allow your mind to enter that space where your creativity just seems to flow - this is often rare if you happen to have to earn a living and raise a family, and that's most of us.”

Jackie blames the anxieties linked to the pandemic but the spread of the virus has also prompted thoughts with a more philosophical bent: “I have also been filled with this sense of my own mortality, a feeling that this short stay on this planet might be even shorter than I'd hoped or expected. So while my creative flow felt stymied, I had a sense of urgency that I ought to finish some of the things I'd started - there is so much lurking in the back of my head that still needs to be said, I didn't want to succumb to the pestilence without getting some of it down on paper.”

One project that has filled the anxious hours has been work on a non-fiction book that Jackie is co-writing with her daughter Ciara. The task involved a good deal of research but the mother-daughter duo have managed to complete the first draft during this lockdown period and are now going through the manuscript revising and editing.

Jackie has also turned once again to poetry and is putting together a collection she’s been planning for some time and revising and ordering these poems with the intention of publishing later in the year.

On the prose front, she’s been organising some of her notes for an anthology of short stories and produced two short stories which are in draft form and “need lots of polishing” and plans are also underway for the plot of a third piece.

Jackie explains: “These are pretty dark stories, full of twisted characters and bleak landscapes, and an unveiling of some of the hidden corners of life that we prefer to keep under tarpaulin in a corner of a shed. I guess it's the influence of the darkness of the times that we are living and the prospect of harder times to come.”

Another area where Jackie has been busy is posting advice for young writers on her Write Gibraltar blog and setting up a series of pages in that blog called Simply Stories, where for a week she uploaded a short story a day. The hope is that other writers will submit stories to the blog. The Gibraltar Writers Facebook page, managed by Jackie, also keeps her busy as she tries to help writers find opportunities to submit their work or just find inspiration and ideas.

Her tips for writers can be summarised in one easy, down-to-earth motto: “Forget waiting to be inspired.”

Jackie elaborates: “Pick up a pen and paper and write. You can write anything. If you have more time than usual on your hands, don't wait for the Muse (she's a fickle mistress and will only appear when she wants), but whatever comes to mind: a record of your day, your thoughts and feelings, your reflection on any subject, your observations of something you've seen when out on our daily walk, or whatever pops into your mind at that moment.”

She urges budding writers to “get into the habit of allowing words to flow through you” adding that, after a couple of stabs at this, “random thoughts will start to take shape and emerge as a coherent whole.”

Once you’ve tried this, she says, you can play around with it and, “before you know it you've created something worth the rest of us reading.”

The pandemic itself, she argues, gives the writer’s task an extra urgency:

“I would ask everyone and anyone who writes, to do it now. Now is the time to start, in your own medium, your own voice, your own style, to tell the story of this strangest of times that we are living in Gibraltar. Future generations will be grateful that you did.”

Another pastime many are turning to during lockdown is reading - Jackie recommends we approach the free time in a relaxed way, without any pressure to tackle some pre-determined reading list: “Read what you enjoy most, and don't be afraid to dump a book (well, thoughtfully giving it a new home) that you can't connect with. But now and again, try something you've never tried before in a genre you would not usually be drawn to reading, push yourself out of your comfort zone; you might just like it and that will open up a new world for you. And try to read something upbeat - there's enough negativity going on without having to pour more into your life. Hence my avoiding a re-read of Camus' La Peste which reminds me of A levels!”

Jackie’s own lockdown reading list is eclectic and a product of following her own advice: “Having time to read has also been wonderful. Proper time, not just snatched chapters while waiting for a bus. I've got through numerous novels, a re-read of Carol Ann Duffy's 'The World and His Wife', a short history of writing (as in cuneiform and hieroglyphs etc.) and have almost finished a book about the early life of Queen Victoria. There is little reasoning behind my reading choices - it's whatever takes my fancy at that moment in time.”

Apart from reading, writing and giving tips to writers, Jackie has particularly enjoyed chatting to her children online. She says, “I have six children and only one living at home now, and also four grandchildren. WhatsApp group chats, Facetime and Zoom have been great for keeping in touch, and that has been happening far more recently because we are all indoors more and need to communicate more.”

Of course, there’s also been time for Netflix (“currently watching Vikings, but have managed all episodes of An Idiot Abroad, Gavin and Stacey, After Life, Extras, among others”) and Patrick Stewart's daily rendition of Shakespeare's sonnets. “What a wonderful voice. He makes them come alive in a way that reading the words off the page just doesn't.”

And what about when all this is over? Jackie concludes her long chat: “I haven't decided what I'm going to do once lockdown is lifted - I'm a bit of a hermit and being forced to stay in and avoid contact with other people has honestly not been much of a hardship. I think on that first morning, I'll head to Sacarello's though, book in hand, and read over a couple of leisurely coffees, munch on a torta de aceite, until the place becomes too busy to concentrate. That appeals!”