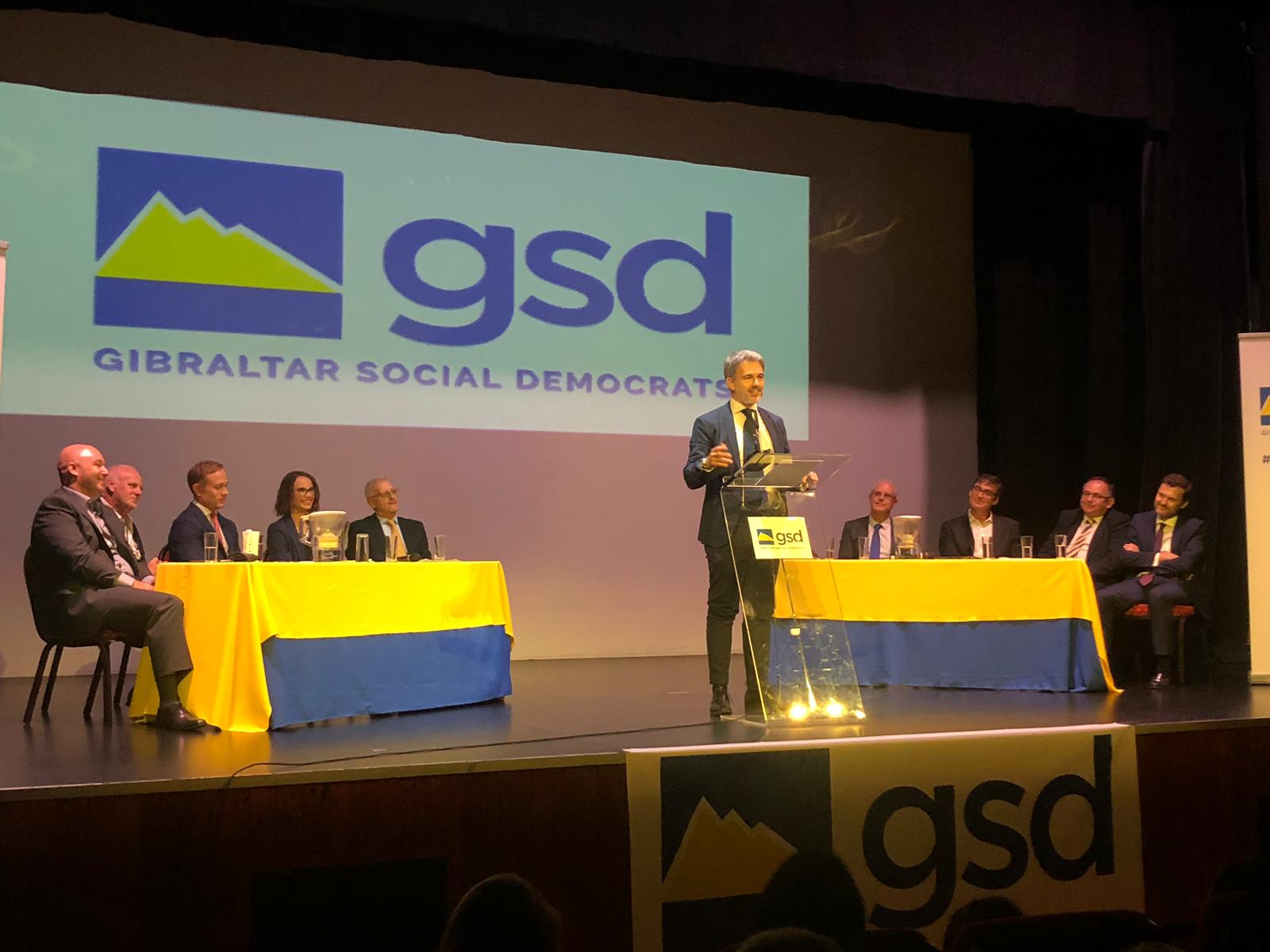 The GSD held a public meeting on Wednesday. Politicians stood outside the theatre and greeted voters to the well-attended event, which was held at the John Mackintosh Hall which was decked with blue and yellow flags.

Addressing supporters publicly for the first time since announcing his candidacy, Freddie Ballester started off by explaining what the GSD had done in its time in government from 1996-2011. He reminded people about the failed bilateral sovereignty talks, Gibraltar’s relationship with the UK, tourism and the airport ‘jewel’ and the GSD’s reduction in income tax while boosting employment and housing.

Mr Ballester highlighted his excitement to be running in the upcoming election. He then welcomed Trevor Hammond to the stage.

Mr Hammond claimed: “I want an end to the lies and the spin. I want a government that is honest with people that don’t mislead the community and all the time trying to score political points. It’s not about scoring points it’s about doing the right thing for the people of Gibraltar. Only the GSD can do all of this.”

Next to address the audience was Orlando Yeats, who said he believed his party could win the next general election.  He added: “We need your help. We need to mobilise friends and families to go to the polls and vote for the GSD on the 17th”.

Mr Yeats also said that “the only people supporting the GSLP now are the blinkered, the ‘enchufes’ and the hangers-on.” He claimed: “It’s time for a better way. It is time for a real change”.

A Member of Parliament since 2007, Edwin Reyes began his speech with the conclusion and exclaimed: “Gibraltar’s housing situation today is a real shambles no thanks to the GSLP!” He added: “This GSD stands for a fair deal on housing. It stands conscious that there are people with low incomes and ever growing lists for applicants of the social and medical housing needs.”

Returning to politics, Damon Bossino highlighted his reason for standing was because of his ‘concern’ for Gibraltar’s public finances. He said: “If there is not enough money in our bank, ladies and gentlemen, there is going to be not much money to pay for housing, social services, education and to deal with people of special needs and the likes.”

Roy Clinton took the chance to tell voters: “We have a historic opportunity to make it happen and take back control, not of Brexit, but of Government and our public finances. We cannot afford to not win these elections.”

One of the last speakers of the night was Daniel Feetham, who was later described by Elliott Phillips as the ‘pit-bull of the GSD’. Mr Feetham said: “When we were in government, people had a peace of mind. When we were in government, there were people in employment and people in training. We created 8,000 new jobs in 16 years, increased minimum wage by 69% and increased expenditure on our caring and health services by 400%.”

Elliott Phillips said that the GSD were a broad church who were “socially and economically progressive.”

He also mentioned that politics must be about conviction. He said: “On abortion, I am glad we have grasped the nettle with both hands [...] I don’t believe in left or right policies, I only believe in policies that are right for the people of Gibraltar.”

The leader of the GSD, Keith Azopardi, stood up to give an almost 45 minute-long address. He made a call to put aside “the scaremongering” to talk about “trust and vision”. He claimed: “I’ve been very keen in this election to say there has to be a contest of ideas. It’s important for people to fight an election honestly and truthfully and not twist the truth.”

Mr Azopardi questioned if the incumbent Government is “really ready” for Brexit. He added: “Their Brexit negotiations were a completely lost opportunity for Gibraltar. I have not ceased to criticise them for that.”

He went on to say: “I have been asking the Gibraltar Government to negotiate a ‘Gibraltar backstop’ for months and they have failed”.  This would be similar to the ‘Irish Backstop’, the proposed mechanism by the EU that will keep some aspects of Northern Ireland in the Customs Union (which Gibraltar already does not form part of) to avoid a hard border after Brexit until a future deal is done.

On the economy, Mr Azopardi said: “Our guess is that what you will get if you re-elect the GSLP is £500 million of more borrowing so that the gross public debt of Gibraltar will skyrocket beyond the £2 billion mark. They cannot be trusted on the economy either,” he stressed.

“We will provide fairness and opportunities for workers, more democracy and safe money; because believe me, once it’s in Roy’s (Clinton) pocket no one’s going to take it away from him!”

The leader of the party concluded that the GSD promised: “A strong vision to navigate Brexit safely, to ensure economic success and sustainability, a bold plan to tackle the environment, housing and parking.”

He added that the GSD has “a long term vision for Gibraltar in our 30 year plan, a modernisation of care policies to keep care services responsive to a changing society and a trained workforce [...] and break down barriers of fairness and opportunity.”

At the end of the public meeting, the 10 GSD candidates stood at the front of the stage to wave and cheer to members of the audience present at the John Mackintosh Hall to the tune of ‘Viva la Vida’ by Coldplay.