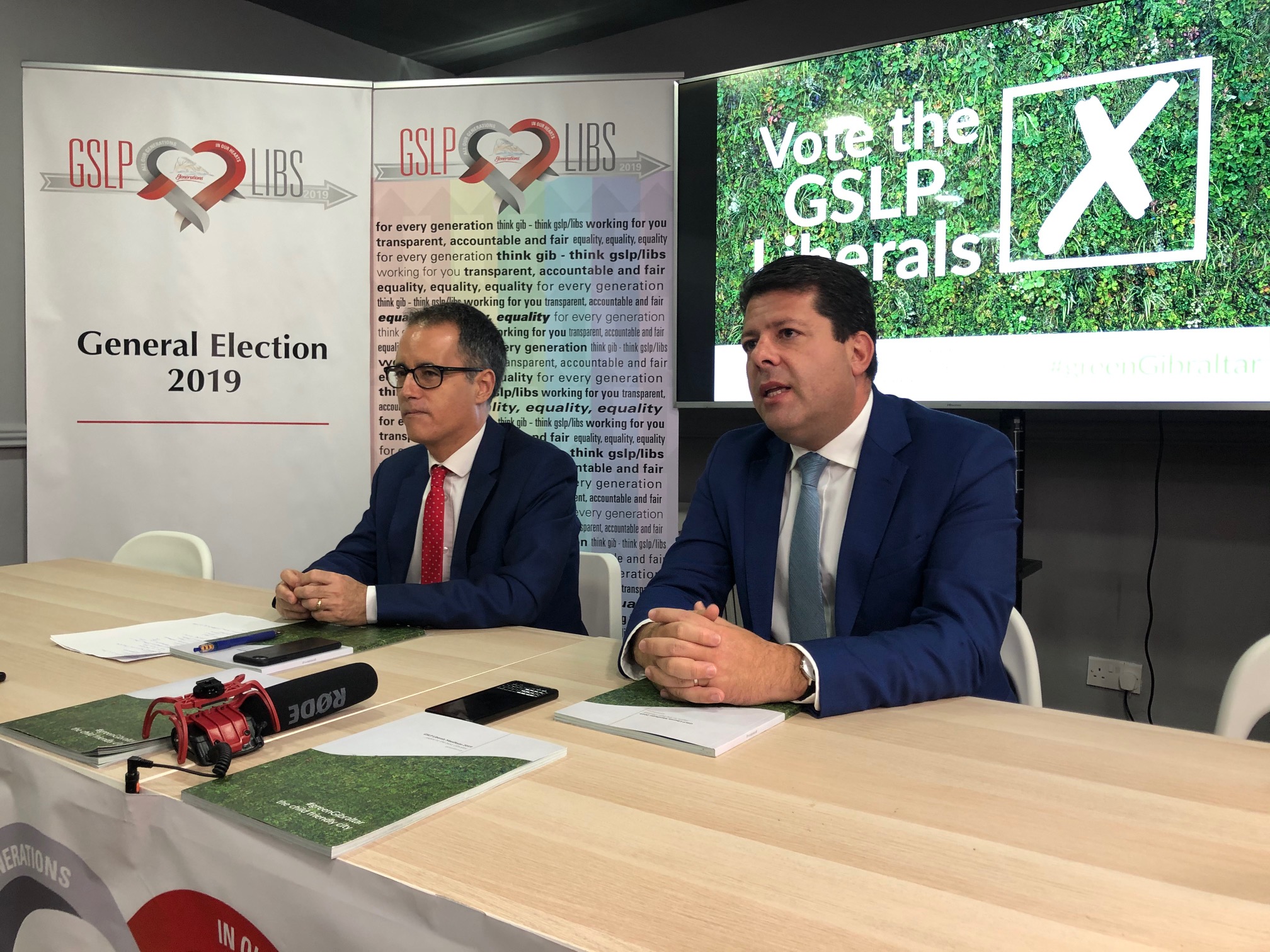 If elected, the Chief Minister and Deputy Chief Minister will take it in turns to stay in Number Six 24 hours a day during the days leading up to and after a No Deal Brexit.

This was revealed this afternoon at the final GSLP-Liberals press conference before Thursday’s vote during which the GSLP-Liberal leader Fabian Picardo and Liberal leader Dr Joseph Garcia set out their work in securing Gibraltar’s inclusion in the Withdrawal Agreement and their preparations for a possible No Deal Brexit.

If Gibraltar is faced with a No Deal on the 31st October, Mr Picardo said the key priorities if re-elected were to “keep Gibraltar safe, steady and secure.” The 24-hour presence at Convent Place would start 48 hours before a No Deal Brexit and end 72 hours after the departure from the EU.

“One of us will always be awake and available at Convent Place so that we can deal with any of the eventualities that may be arising,” he said, adding that a future GSLP-Liberal government “would leave nothing to chance.”

Mr Picardo outlined the various permutations Brexit could take in the next few days with an agreement, a no deal or a change in government in the UK all remaining live possibilities. This coming Saturday is the key date as the House of Commons meets to either endorse a deal or react to a no deal scenario.

Mr Picardo hit out at the GSD for first threatening to pull out of the MOUs and Tax Treaty with Spain and then conducting a “U-turn barely 48 hours before the ballot” and saying they would keep both until the end of a transition period next year.

Mr Picardo said: “You’ve got to ask yourselves whether you can ever trust their judgment again - this has been the key issue in the past three years and if they’ve got that wrong and now need to change their position you won’t want to trust them with difficult decisions in the future.”

In a press release issued this evening, the GSLP-Libs said: “The GSD cannot be trusted if they perform a U-turn in relation to their views on the Brexit MOUs and the Tax Treaty. It is well known that the policy of the GSD to date has been to oppose the four MOUs which were negotiated between Gibraltar and Spain. The party’s policy was also to seek the termination of the Tax Treaty. This is part of the architecture of the UK-EU Withdrawal Agreement, which allows the extension of the transitional period to Gibraltar.

“The failure by the GSD to honour our international obligations would mean that we would leave the EU alone on 31 October without the benefit of a transition. This is dangerous and irresponsible.”

Mr Picardo added: “The U-turn performed by the GSD’s Damon Bossino last night on GBC’s meet the editors is the most dramatic change of position on any subject that Gibraltar has ever seen. To see such a change of position barely 48 hours before the polls open on the most fundamental issue in this election is a dramatic admission of the GSD’s failure to understand Brexit.

“Let’s be clear, as recently as two weeks ago the GSD were saying in their Manifesto that they would scrap our Tax Agreement. Now they are saying they will keep it. This is a total volte face.

“Keith Azopardi said that there was no chance of Prime Minister Johnson reaching a deal with the EU, now he is having to prepare for the possibility of such a deal and to accept the Withdrawal Agreement as better than a no deal Brexit, just as we have always said it was.

“This U-turn by Mr Bossino for the GSD is now the final straw in demonstrating that on the key issue of our generation, the GSD have got it wrong. Their judgment was as wrong on the MOUs, the Withdrawal Agreement and the Tax Treaty as it was on the Brussels Agreement and the ‘cherry picking’ argument on the Cordoba Agreement.

“On the key issue in this election the GSD have failed to understand the possibilities, the permutations and the politics and have failed to hone their policies in order to ensure that Gibraltar was kept safe and secure.

“If people needed evidence that they cannot trust the GSD to make the right judgment call THIS IS IT. We have ensured that the GSLP-Liberals’ positions will keep Gibraltar safe and secure and that whether there is a deal or no deal our nation will be protected.

“This U-turn will be the last straw for many people. It demonstrates how unprepared the GSD are to manage the many angles and nuances of Brexit.

“Many will wonder whether there is some connection between the enormity of this U-turn on the Tax Treaty and the fact that it was delivered by Mr Bossino in the same programme as he admitted that he wants to replace Mr Azopardi as the leader of the GSD.”

Liberal Party leader Dr Joseph Garcia said that the Opposition had been sufficiently well briefed during the Brexit process. He said: “The opposition in Gibraltar must be the most well briefed about Brexit in the whole of the European Union.”

He explained that there had been over twenty detailed briefings to members of the Brexit Select Committee. Some of these lasted nearly two hours and covered the wider U.K.-EU picture and the more specific issues in relation to Gibraltar, the EU, the UK and Spain. He added that the GSD Leader has himself been briefed separately as had the Leader of the Opposition.

He added that Mr Picardo and Dr Garcia had flown back for the weekend from Brussels in October last year, met the Cabinet and the Opposition to keep them informed and flown back again adding that Mr Azopardi “did not make himself available to meet” despite the importance of the issue and now complains of a lack of briefings.

There were meetings, Dr Garcia explained, which included sight of text when drafts were available and details of the legislation and no deal planning. Moreover, he said the Opposition were given the opportunity on each and every occasion to “ask questions, comment or make suggestions.”

Mr Picardo concluded by saying that the GSLP/Liberals were the only team with the experience and the personal relationships with the key players involved and that it made sense to continue with the same Government to see Brexit through.