The Government has announced that regarding the libel case brought against Sr. Paco Ponce of Cross border Association Citypeg, by Minister Joe Bossano and GJBS, the three parties have reached a settlement. On 2nd February, Sr. Ponce apologised to Minister Bossano noting that the group raised a possible case of discrimination and not a personal accusation against anyone. The group claimed that they do not want to crate confrontation with the Gibraltar Government. 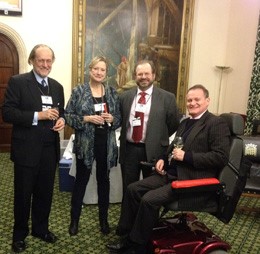 The event included a presentation on ‘Safeguarding the Globally Important Wildlife of the UK Overseas Territories and Crown Dependencies’ by Dr. Mike Pienkowski, Honorary Chief Executive of the Forum.

The GSD opposition has recently been approached by a number of Senior Citizens asking for advice on early repayment of Government issued debentures, not due until 31st December 2013 and 31st December 2015.

Feb 08 PDP - Housing And Restoration Can Be Compatible

The PDP totally agrees with the sentiments expressed by The Gibraltar Heritage Trust in their recent press release. The Upper Town is indeed “an untapped gem”.

The PDP therefore welcomes the fact that the GSLP/LIB Government is no longer going to add an extra floor to the blocks in the Moorish Castle Estate. This was an ill-advised scheme considering that those buildings are in such a bad state of repair with damp and humidity issues and would not have benefited with an extra floor. The other issue concerning us is that this is an area of outstanding heritage value and should be restored as such. The estate was built there in a time of great need and served its purpose but now with the present deteriorated condition of the buildings these residents should be re-housed in far better, modern, purpose built housing that befits our evolution as a people. Housing schemes require facilities close by, parking, shops, schools and open areas.