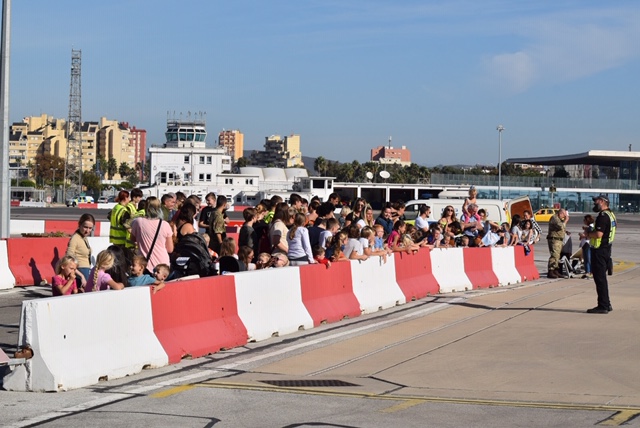 During Half Term the Command Community Support Team (CST) put together a programme of events for all the children living in Four Corners.

Kicking off on Monday 28 November the week started with a visit to King’s Bastion Leisure Centre.  Thirty-eight under-5s had fun at the play and party whilst 16 teenagers (plus staff!) enjoyed showing off their ice-skating skills.

Thanks to the Joint Services Police Unit (JSPU) 24 the over 5s had their fingerprints taken, were arrested, locked in the Police Van cell and driven off – only to be release a short time later.  The children were also shown how to disable a possible offender! An exhausting but fantastic first day.

Tuesday saw the children enjoying a combination of messy play, pumpkin carving (35 in total!) and bowling. Thanks must goes to the Military PTIs for providing the teenagers with team games at Devil’s Tower Camp.

The highlight of the week came on Wednesday with a visit to the Gibraltar Defence Police Dog Unit. The event, which took place outside RAF Gibraltar, saw Inspector Prisan Fa and her team of dog handlers put on a jaw dropping show, highlighting the skills and agility of these amazing working dogs!  There was even time at the end of the show for the children to meet the dog handlers and their four-legged colleagues.

Onto Thursday - Halloween day!  One hundred and one children dressed not as Dalmatians but as witches, vampires and monsters.  The children gathered in HELM Point for a grand Halloween party complete with fun games, disco and treasure hunt. With the number of children involved, this was a huge undertaking by the CST.  The team however were supported with some willing volunteers – without their support it would have been difficult to host such a large party.

Friday came around too quickly and saw 74 children paying a visit to the AFRS.  The team pulled out all the stops, with lots of flashing blue lights, whoop whoop noises and water jets flying through the air - much to the delight of the children and adults involved.  Meanwhile the teenagers were making a different kind of noise as they took part in a DJ master class hosted by BFBS. It was a great last day and a great way to end the week.

Sally Crawford, Command Community Development Manager said: ‘I would just like to thank everyone who volunteered their services to help organise and manage the week.  I would also like to thank all the units that took time out of their busy schedules to put on a number of events to ensure the children had a fun-filled week. Thank you so much to everyone that supported us – we all had a great time!