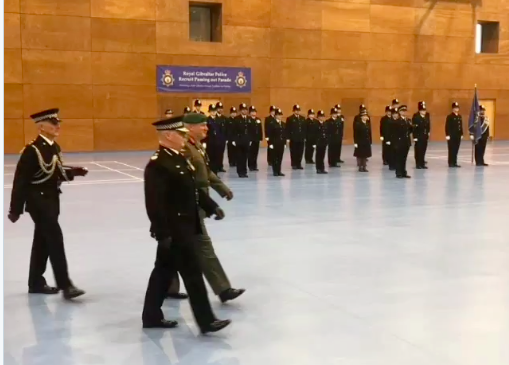 Nineteen New Recruits For The RGP

A freshly recruited batch of police constables took part in a passing out parade yesterday afternoon.

Their training course commenced in August and combined classroom work with practical activities.

The 19 recruits, a mix of male and females aged between 19 and 45, received instruction in relevant policing areas including interviewing techniques, unarmed defence tactics, the role and powers of a police officer, criminal legislation, practical scenarios and role plays together with other specialist skills.

Having successfully completed their basic training, the recruits will be attached to operational duties for two weeks along with the training staff and will then assume general independent patrolling and other operational police duties in January.

The following awards were handed out at  the ceremony:

Inspector John Olivera said: “The Recruitment and Training Team have high hopes for this recruit class and look forward to seeing them develop over the coming months and in their future careers.”

In the absence of the new Minister for Justice, who is away from the Rock on government business, it falls to me to address you on behalf of the elected government.

I want to start by adding my own welcome to you to the service of Her Majesty the Queen and the Crown she represents.

All of us who serve the Crown in different capacities must be proud of the opportunity to do so. We must be diligent in observing our obligations in doing so.

To the community those marks that identify you as a police officer are a mark of distinction. That distinction signifies respect.

For some it may also represent a challenge.

To all, with tact and good humour, you will be a friend that will help when most needed or a foil that will prevent a breach of our laws.

Today, as we grapple with ever more sophisticated issues you will be entering a career that will take you from the role of the traditional Bobby on the beat, to cyber sleuth and to see - hopefully infrequently - some things which the rest of us will never have to see.

Because in Gibraltar we live in safety and security thanks to the work you all do.

Sometimes you will have to face those issues under the international media spotlight, as was the case this summer when your colleagues successfully dealt with the issues that arose in respect of the Grace 1.

And you are the thin - but now increasingly thicker - blue line that assures us of our safety and security.

You will enjoy the full support of those of us in the wider government for your role in keeping Gibraltar that beacon of safety and security.

And in doing so, I am conscious that good police officers are a precious resource.

That is why we have agreed wholeheartedly with the view of your Commissioner that police officers need to be doing police officers jobs and not clerical jobs that we will support others being provided to do.

And when I talk of good and great police officers I am also conscious of the excellent work being done in delivering accountability in the Royal Gibraltar Police.

In recent years we have seen officers discharged from the service for failing to live up to the highest standards.

We have seen former officers prosecuted.

And in doing so what we are seeing is the rule of law in action.

Too often people ask the simple question "who polices the police"?

The simple answer is that you - the police - do, and you do it very effectively. And that is one of the basic building blocks of our precious rule of law.

That no one is above the law.

Not even the law enforcement officers.

All of us are equal before the law.

Whether it comes to seeking her protection or suffering its consequences.

Therein lies the right, comfort and ability of each of us to sleep soundly at night.

The same cannot be said of every country in the world or of many countries in the world with the certainty in which it can be said of the United Kingdom and of Gibraltar.

Welcome to the most worthy of endeavours.

To your families, as a person who has had police officers in his own family, I say welcome too and I say thank you also.

For you will be the back bone that will facilitate the discharge by your loved ones of these difficult duties.

Please understand that we all need these officers to be able to work knowing they have your support at home.

They are not alone.

So thank you to you also.

And so I end by asking you to look forward to a career in law enforcement which is a life dedicated to making our community a better place each day.

Justice is blind, of course.

The job of being the Rubicon that lies between us and anarchy and chaos and to serve Gibraltar and protect us all.

Thank you for making the choice you have made to take on that role. And let's be careful out there! 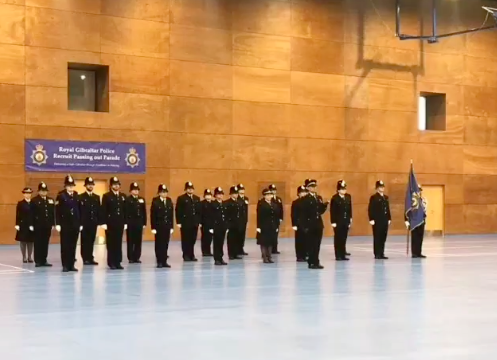