Nov 19 - I Almost Just Had An Accident 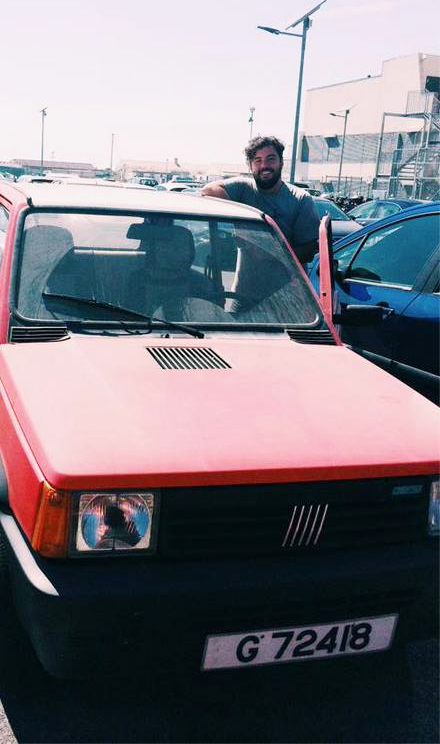 I think every time I get out of my car I could repeat the same six words. Every time. I’ve had a driver’s licence for more than three years (or is it four?) and the same old car I learnt in, a 1992 FIAT Panda I bought off a friend for £25. No, there isn’t a zero missing. That’s twenty-five pounds sterling. And it might be the fact that it has no airbags and the doors are metal flaps, but I like to think I’m a cautious driver, a good driver. I like driving; I find it relaxing; but the fact that my car isn’t in the best shape means that I can’t really go far in it, so I’m basically confined to this Scalextric track we live on.

When I was sixteen, still with no clue on how to drive and no experience of driving a vehicle beyond a bicycle and a razor scooter, I experienced traffic in Lisbon’s city centre; and after a pretty crazy taxi ride we all fell out of the car and I remember thinking it was probably the most insane thing I would ever experience in a vehicle. A memory I had quickly put away deep in my brain five years later. By then I was twenty-one, I had learnt how to drive and had only been road legal for a month when a car full of eighteen year olds crashed into me* whilst I was stopped at the traffic light on the southern end of Queensway. It didn’t give me any time to experience the road properly: I hadn’t left Gibraltar because I didn’t have a green card and the day after I had quit my summer job to practice driving with my brand-new licence my car got ruined. And I really wish all this hadn’t happened; not so much because I wanted to drive more or because my car had been really messed up, but because my experience on the road could’ve never prepared me for four months cycling in a cold, wet and snowy northern Italian city where fear of death on the road was a daily thing.

And I thought I had seen it all!

I thought I’d never – in any kind of vehicle – have to be scared for what could happen on the road. I’m no scaredy cat, scaredy squirrel† or scaredy anything. Some might say, including myself, that at times I’m a little reckless. But it’s what driving in Gibraltar has made me.

I’ve heard it a million times, “Gibraltarians are really good drivers, we need to drive on very narrow roads, through mainly pedestrianised areas and we can park on hills without a problem”. I’d like to meet these good drivers, I really would. Because yes, we do drive on very narrow roads, but we also get seventeen year olds on their scooters trying to overtake on both sides of cars on Governor’s Lane and Cornwall’s Lane. We do have to drive on mainly pedestrianised areas, but watch you don’t get run over outside Mothercare by a biker or outside Gache by a taxi speeding down George’s Lane. And yes, we do know how to park on hills, but God help you when you’re doing your test on Scud Hill, learning to park properly and someone’s decided to stick their bike in a spot for cars, or parked half on the pavement, or you’re trying really hard not to stall your car with some idiot beeping and shouting out his window, behind you.

We really are the worst drivers. Just a couple of hours ago on a drive from Morrisons to Engineer Road I almost crashed into someone at every roundabout, because people seem to be allergic to their indicators. And at SIX roundabouts in a five-minute (or less) drive that’s a lot of potential crashes. Oh, and I almost forgot about people, now that it’s darker earlier, using their high-beams when really (although you shouldn’t) you could drive around Gibraltar with no lights on at all because the roads are very well lit.

How can we call ourselves good drivers when we live in a city where it’s normal for two cars to drive side-by-side so the drivers can have a chat, where kids (and adults too, mind you) ride their bikes down Queensway like it’s a Grand Prix, where we have no problem with jumping red lights, not stopping at zebra crossings with no traffic lights, stop outside Mumtaz to have a chat whilst three or four cars just cannot get through, park just outside the Morrisons cafeteria when just metres away there are plenty of empty parking spaces, and have a ridiculously easy-to-drive stretch of road we call The Black Spot because so many people have crashed there? ‡

Oh, and what about people driving around with music so loud you can’t hear the music through the vibration of the car? Well, I guess that’s a different story…

*”We were hungry and got distracted by the takeaway”, said the driver, after his ‘friends’ ditched him right after pushing me, in my car (with the handbrake on), onto the other lane.

†Second Google suggestion, to my surprise.

‡With a speed limit that, I have to say, is too low and people driving at quite possibly triple the speed limit.

Check out some of Stefano's other projects at: