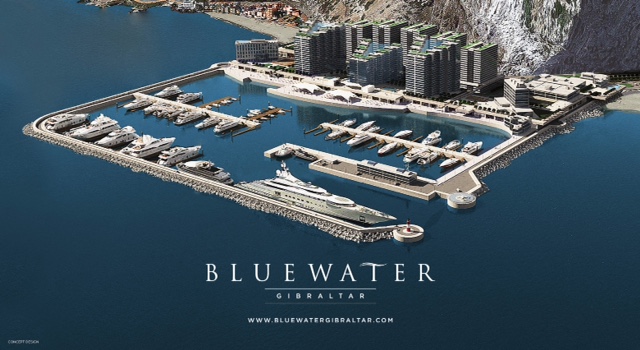 • A SUPER YACHT ONLY MARINA

The Government revealed this morning that it has made a decision on the award of the project for the Eastside reclamation.

As a result, the Government has entered final negotiations with Camoren Holdings Limted for the development of “Blue Water, Gibraltar.” Camoren is a Gibraltar company which has been incorporated by principals Leslie Allen-Vercoe and Michael Crissel as the corporation which will develop the project.

Camoren’s bid for the project will provide a direct consideration to Government of £83 million by way of cash premium.

The total development value of the project will be an investment in Gibraltar in the region of £1.1 billion. A huge number of jobs will be created for the development period as well as for the running of the developed areas once built.

The project will consist of the development of a resort that will provide:

• over 450 high end apartments and suites;

• over 1,000 affordable homes available on the Government’s co-ownership scheme;

• a marina exclusively for Super Yachts;

• a number of commercial units which will provide for luxury shopping and cafes and restaurants;

• a promenade along the sea front linking Eastern Beach to Catalan Bay; and

• the re-routing of traffic along the eastern side.

The project will also include provision for the development of a multi-storey car park for in the area of Catalan Bay which is being developed with the convenience of beach users in mind. Indeed, the whole development will be designed to protect Catalan Bay and the interests of the residents of that area.

The development has also been designed to be a low energy development, emphasizing the Government’s commitment to the environment and sustainable growth.

In addition, Camoren will undertake certain works for Government at its own expense, including:

• the development of an outer sea wall to protect the existing reclamation;

• the development of a public pool on the Eastside in the area adjacent to Eastern Beach.

In addition, Camoren will be financing and developing the over 1,000 affordable homes, more details of which will be provided shortly.

All the valuations which have been required for the purposes of securing finance by the developers have been carried out by surveyors from outside of Gibraltar. The Government says that this provides “additional comfort” given that the assessments as to the prospects for the Gibraltar economy and the value of land in Gibraltar have therefore been made by entirely objective parties previously with no connection with Gibraltar who have reached “very positive and favourable conclusions” about Gibraltar’s economic prospects.

It is anticipated by the developer that the Blue Water project will attract many international High Net Worth Individuals to Gibraltar. 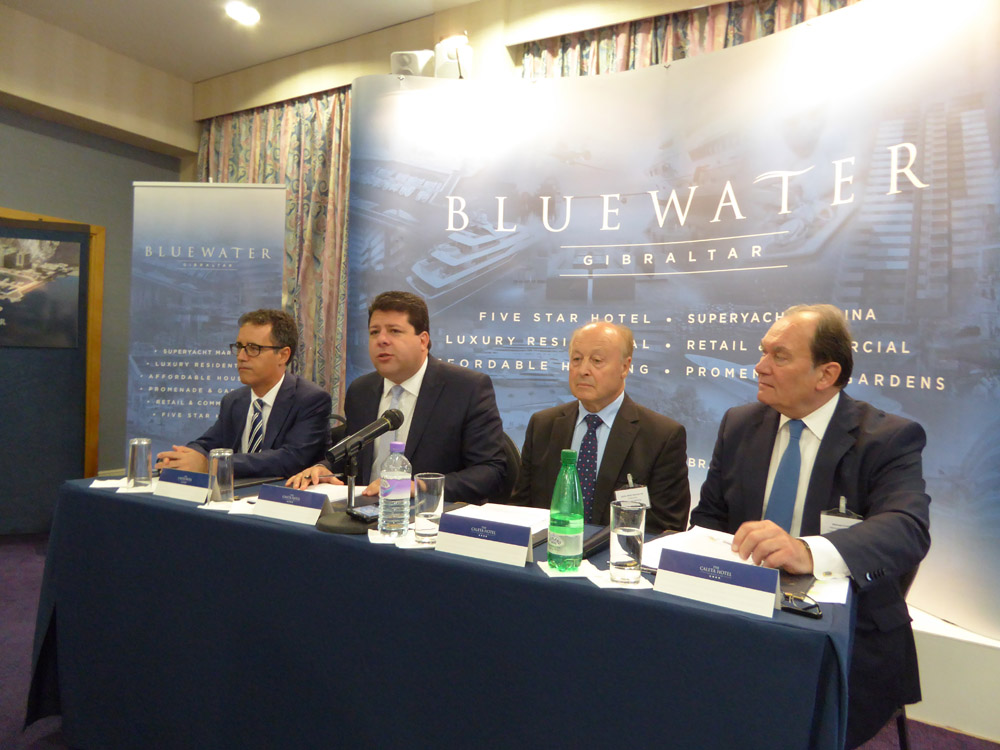 The Chief Minister, Fabian Picardo, said: “This is a hugely important day for the whole of Gibraltar. A day which represents the announcement of the largest ever inward investment programme for our nation. A huge step forward for us economically. A huge opportunity for Gibraltar businesses. A £1.1 Billion pound vote of confidence in our economy and our stewardship of it. A £1 Billion pound boost for an economy that is already posting impressive growth. A huge achievement for us as a Government. We paid £28m for the return of a plot which we are now about to sell for £83m in cash and with additional works to be delivered at no cost to the taxpayer. On top of that we have reduced the heights of what was to be developed on the site and increased the public amenities that are to be available. We are therefore delighted to welcome these new investors to Gibraltar and to start the work now to finalise the award of the project area to them. I am very happy with the final proposed development. We are bringing down the heights of some of the buildings from that allowed under the previous proposed scheme. We are making more of the amenities for the community as a whole. We are moving away from an area exclusively for the rich and are combining the development with some exquisite affordable housing which will be available on the 50/50 scheme. If all goes according to plan, we expect that applications to vary the current planning permission will be filed in the next 8 weeks and that work on preparing the plot will start at about the same time and begin in earnest before the end of the year.

“These outside investors are demonstrating huge confidence in our economy and our stewardship of it. The huge amount of investment coming into Gibraltar through this development will be welcome across the board in our community. The development period for the whole area is expected to be five years and we expect that we will see major movement in the area very quickly.

The Deputy Chief Minister, Dr Joseph Garcia, said: "It will be recalled that the GSLP/Liberals had a manifesto commitment to move forward on the Eastside development which had been static for many years. We commenced with the negotiation of the purchase of the plot from the previous developers which was successfully concluded. We extended the size of the plot and the Eastside reclamation was opened to expressions of interest last year. There has been a long and detailed process of analysis of the different submissions and at the end of that process the Government has selected the best possible option for Gibraltar represented by the successful company with which we are now moving to finalise the final legal details of the award of the project. This is positive news which will represent huge inward investment for Gibraltar and a massive achievement for us as a Government."

Leslie Allen-Vercoe, Chairman of Camoren Holdings Limited, said: “I am delighted that our Company is now finalising the legal details for the award to us of the Blue Water Gibraltar project by Government for the construction of this amazing development on the east side of the Rock. We are very excited by this opportunity, after many months of hard work, as we plan to construct a development which will make Gibraltar and all of the rest of us very proud indeed. I am very grateful for the support given to us by the Chief Minister, Deputy Chief Minister, other Government Ministers, many civil servants and others in the very tough process of negotiation which has led us to this announcement. Our Company is entirely confident in the prospects for the Gibraltar economy which is showing strong and resilient growth. We are confident of the prospects for Gibraltar’s future. And we are confident of the opportunities that Blue Water will create for Gibraltar also. I would also like to thank our local partners, Worth Consulting Ltd, who have been of great assistance to us in working closely with the Government to achieve this successful and mutually beneficial outcome for Gibraltar and for our company.

“The development we are announcing today represents significant inward investment of well over £1 billion, circa £1.1 Billion. This will create a huge boost to the Gibraltar economy and will generate many sustainable jobs opportunities. This investment will deliver important economic growth and will also offer opportunities for many Gibraltar businesses. This development will no doubt become both a landmark development in Gibraltar and indeed in the whole of the Mediterranean.”