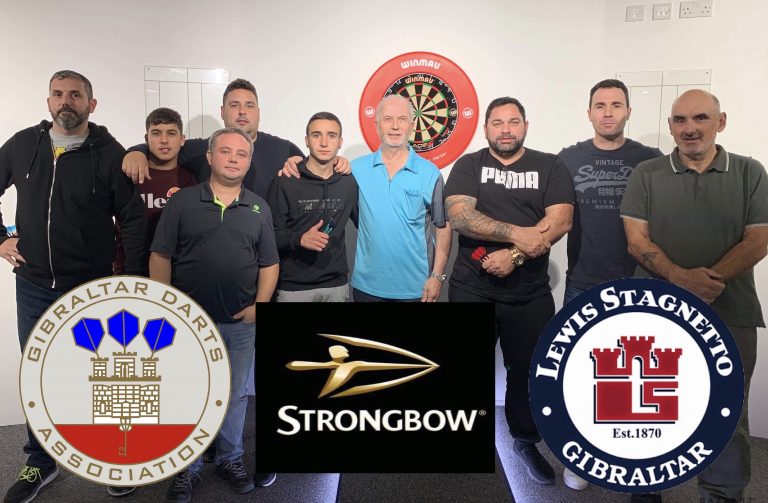 The winners were a five-man team from St. Theresa’s Social Club.

The trophy was donated by Mr. Bill Gibson, the Leicestershire (UK) secretary and brought to Gibraltar by Mr Dicky McCarthy and Mr. John Trinidad.

This year saw a very good turn out with 49 players registering. The format is Teams of 5 players, who play “best of 3” legs. The tournament was played in a great atmosphere with all players impressed with the new venue.

In the Preliminary Round College secured a comfortable win over Glacis 4-1 with Karl Mena being the only Glacis player to win his match. The match between Ultra Terrestrials & The Punishers was a much closer affair only settled with a last leg decider with Will Pisani beating Isven Efigenio 2-0.

College A had a comfortable win over Monsters Inc with Shaine Israel being the only player on the losing team to claim a leg.

College B made light work of The Punishers, Chris Dalli claiming the only leg while losing 2-1 to George Federico, who also hit a 180.

Varyl Begg Warriors B had a closer match V Gib Spartans which went to a deciding leg, won by Jayden Wood.

College B only had 4 players (making their reaching the final all the more impressive) so started the match 1-0 down.

Sean Negrette beat Justin Stagno 2-0 followed by Dyson Parody sealing the victory by beating George Federico 2-1 and hitting another 180 on the way.

Congratulations to St. Theresa’s, commiserations to College B!