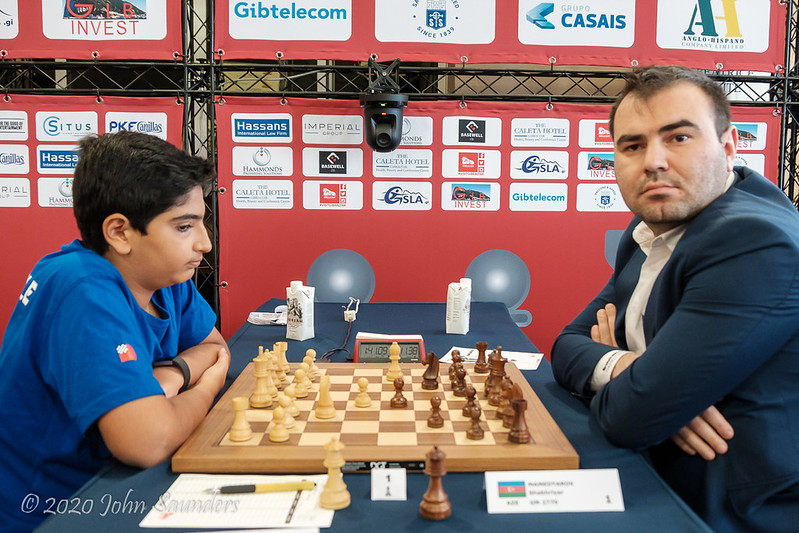 Round one was the usual slaughter of the innocents, with rating differentials of around 300 points per board for the most part. This year’s joint top seeds, Maxime Vachier-Lagrave (France) and Shakhriyar Mamedyarov (Azerbaijan) saw off their opponents efficiently, as did the next six players in order of rating. The 2700+ player who perhaps had to work the hardest was David Navara, who ground down Jovanka Houska in 61 moves in an opposite-coloured bishop endgame which, unluckily for the British Women’s Champion, turned out not to be as drawn as they often are.

Running one’s eye down the results, the first deviation from the monotony of 0-1, 1-0, 0-1, etc, was Russian GM Maxim Matlakov’s draw with Erik Hedman, a 43-year-old Swedish IM. This was the same result as in last year’s third-round game between the same players. This might explain why Maxim decided to vary from their 2019 game with 3...a6 but it made no difference to the outcome.

Gawain Jones was also thwarted by some stern resistance from 16-year-old IM/WGM Nurgyul Salimova from Bulgaria, who did well to hold the formidable English GM with the black pieces on her debut in the tournament. Gawain huffed and puffed for 65 long moves but he couldn’t find a way to blow his opponent’s house down.

There were some other draws between pros and lesser lights, with some of the visiting Indian GMs having the most difficult in securing first-round full points, but the most notable casualty was the 14-year-old star of Indian chess, Rameshbabu Praggnanandhaa, who succumbed to another Indian player, WIM PV Nandhidhaa, who overcame him in 67 moves. Just when Pragg seemed to be on the point of gaining good compensation for a sacrificed pawn, around move 28, he suddenly lost the thread of a complicated position and found himself obliged to give up his queen for two minor pieces in the hope that the even more complicated position which resulted would favour him as a 2600+ rated player against someone rated 2312. But it proved to be a case of “the operation was successful but the patient died”. He stirred up enough trouble to improve the material deficit to queen for rook and bishop, and seemed to have chances to hold, but eventually White got a grip on the position and steered her passed pawns up the board to victory.

The leading contenders for the £20,000 top women’s prize met with tough opposition. Highest rated female competitor Anna Muzychuk was held to a draw by Argentinian WIM Maria Florencia Fernandez, but there was a calamitous loss for former women’s world champion Alexandra Kosteniuk. She seemed to be well on her way to victory against WIM Zhou Guijue (2193) of China when placed her queen on a square where it fell victim to an obvious knight check cheapo which you would normally expect such a brilliant tactician to find in her sleep. A pity for Alexandra, as she had played a model game to that point.

Daniil Yuffa of Russia produced an attractive finish against Iozefine Werle of Netherlands. In the diagrammed position, with White to play, the Russian GM could have finished more prosaically with 40.Rxe8+ Qxe8+ 41.Rxh7+! followed by 42.Nf6+ winning a piece, but he found the more clinical 40.Nf6! leaving both rook and knight en prise and forcing mate in three moves. Black tried 40...Re7 but resigned after 41.Rexe7.