May 21 - Garcia Promotes Gibraltar In Washington 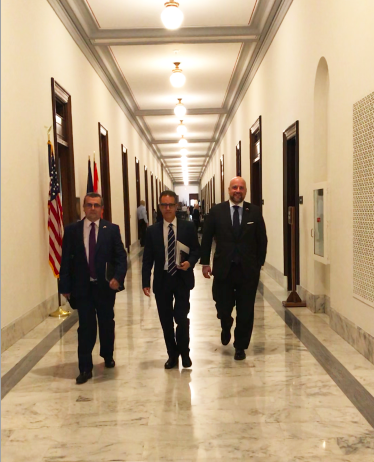 The Deputy Chief Minister Dr Joseph Garcia is in Washington for a busy schedule of meetings and engagements.

This reflects the continuing policy of the Government to put across the Gibraltar point of view on important issues to decision-makers in the United States of America.

Dr Garcia will be meeting Members of Congress from both the Democratic and Republican parties, as well as other relevant personalities.

There have been a number of visits to Gibraltar by Members of Congress over the last few years. Some of these visits have taken place under the United Kingdom MECEA programme and others independently of this.

In addition to this, a branch of the American Chamber of Commerce, AMCHAM, has been established in Gibraltar in order to strengthen economic and commercial links between Gibraltar and the United States.

Dr Garcia is being accompanied by Gibraltar Government Representative in the United States David Liston and by Personal Assistant Ernest Francis.

The Deputy Chief Minister Dr Joseph Garcia said: “The Government set itself the task of increasing awareness of Gibraltar in the United States and this part of that process. There was considerable interest last time I visited on our planned departure from the European Union, on self- determination as well as on general security matters.”