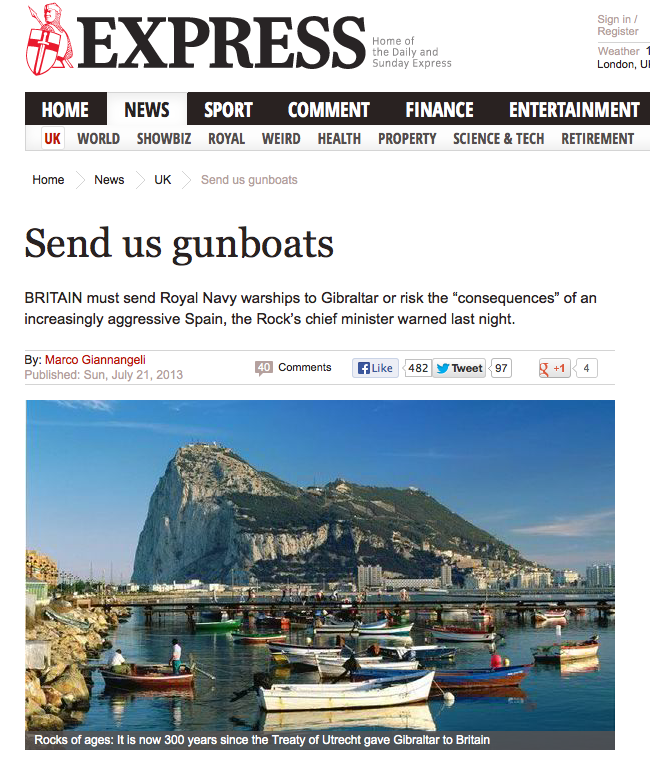 The Sunday Express yesterday carried a story on Fabian Picardo’s call for a larger Royal Navy presence to combat the increasingly assertive Spanish incursions into British Gibraltar territorial waters. The report, with the title “Send Us Gunboats”, said that Mr Picardo had explained that, although Spain will not go as far as staging an invasion, there could nevertheless be “consequences to British sovereignty” if UK Naval assets weren’t beefed up in the near future. He said that the two small patrol boats stationed in Gibraltar were not sufficient to send the clear message that “these are very clearly British Gibraltar territorial waters.”

The article also compares the Spanish Prime Minister’s tactic of deliberately inflaming tensions over Gibraltar to that pursued by the Argentinian President Cristina Kirchner with regards to the Falklands. Both attempts, the Express says, are designed to divert voters’ attention from the economic crisis.

The article also mentions the most serious incident to date where a local jet skier was shot at by the Guardia Civil, a story that was widely covered in the UK and international press.

Despite increased pressure to act, the article said that a Defence Ministry spokesman had stated that the Royal Navy’s assets were sufficient to challenge unlawful incursions.