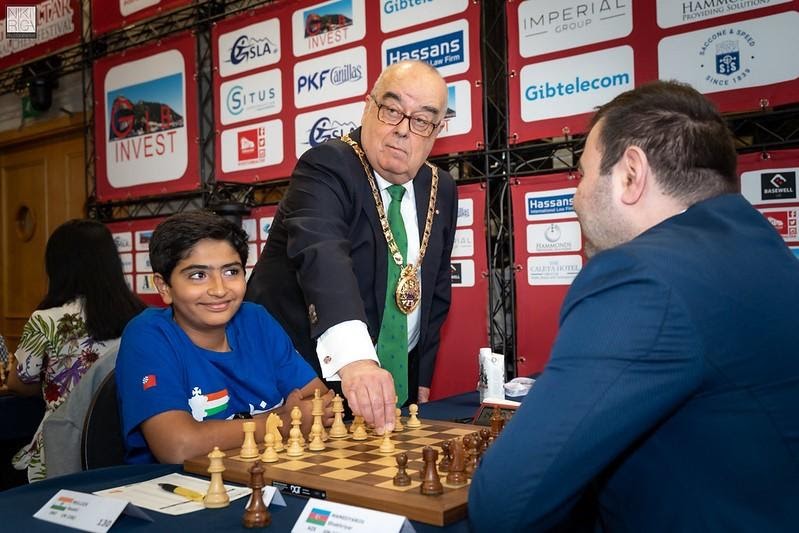 A statement from the Gibraltar International Chess Festival follows below:

Addressing the packed hall of players in the main playing area, he said, chess had come of age as it entered its 18th edition. The First Move was made on the top board where Grandmaster Shakhriyar Mamedyarov from Azerbaijan, currently No.8 in the world, played his first round game against Candidate Master Raahil Mullick just 12 years of age from India and No.5 in the Under 13s category in the world.  At the other top table was joint first seed at this tournament Grandmaster Maxime Vachier-Lagrave from France, a familiar face in the chess festival, and International Master Irine Kharisma Sukandar from Indonesia.

Other top players this year include: Hao Wang of China, Veselin Topalov of Bulgaria, David Navara from the Czech Republic and GM Liem Le Quang from Vietnam.

Mr Gonçalves spoke of the professionalism of the tournament describing it as “a very professional set up whilst at the same time friendly and open, and which has put Gibraltar in the map”.

“This is probably the most wonderful thing to have happened to sport in Gibraltar. What has been achieved in just eighteen years, now bringing together over 60 nationalities of players and attracting such a distinguished gathering is very remarkable,” he said.

He admitted he was keen to return to see more chess over the next 10 days because to see it in action had been a revelation and to see it “incredibly impressive”.

The Mayor was shown around the event by Festival Director Stuart Conquest and founder Brian Callaghan, and Chief Arbiter Laurent Freyd.