Jul 31 - Bring Out Your Lezzies, Your Gays And Your Queers…And Your Poets! 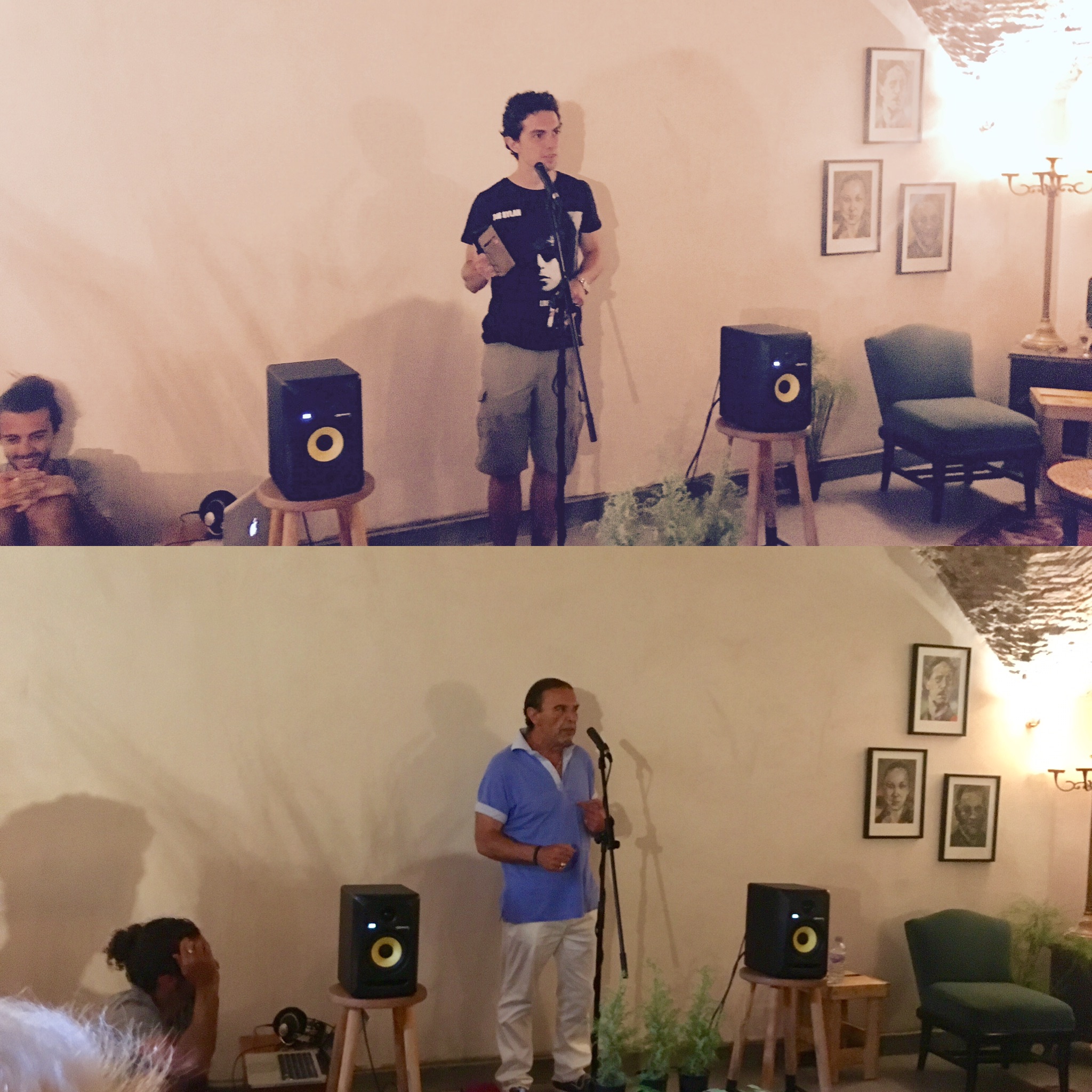 The past couple of weeks in Gibraltar have been rather exciting politics wise but at the same time also depressing with the cookie-cutter male lawyer/politicos strutting around like peacocks and getting all hot under the collar because a woman (yes a woman!) ranked higher than them in a poll that they all said was rubbish anyway (after the fact…)

What better way to escape from all this nonsense than go to a poetry slam on a Saturday night? The Kasbar in Castle Street serves the best vegan food I have ever tasted plus they make a mean G & T; host Ronnie Alecio and sound-guy Jesse Trinidad also know how to put on a jolly good show. So what is a poetry slam? Well, there’s a room full of people and a microphone and you take turns to get up and recite two poems, either your own material or another’s and you can go up as many times as you like. The mood and the crowd dictate the show.

First up was the incomparable and inimitable Guy Olivero. A man with the strongest Llanito accent ever who can roll out great swathes of Shakespeare and Lorca off-by-heart. He makes eye contact with the audience and you feel his passion with every syllable.

Giordano Durante gave us a mixture of Clive James and his own work with his usual self-deprecating pre-poem analysis. I loved his piece which was inspired by the Grenfell Tower disaster which was packed with clever observations and alliteration.

The ‘Bob Dylan of Brympton’ Mark Montegriffo teased us with one piece only and I wanted more from him, maybe next time.

Then came Alex Menez, she of the raw and gritty and sometimes sad reflections speaking with the voice of her generation as she commands the mic and bares her soul.

Now enter the surprises, and what a delight they were. A woman who arrived alone and left alone took to the stage and read out her poem about freedom. She was a tourist, and from her accent was Scandinavian but I am not quite sure as she left before anyone had the chance to speak to her. It was as if she had the need to unburden herself, heard about the event, turned up, said her piece and thus released just went on her way suitably relieved. She was a refreshing tonic.

While I was at the bar I saw a guy with a shock of black hair and a bright red t-shirt scribbling away on a rough piece of paper. Five minutes later he was reciting those words in a very weird accent that nobody could get; was he from Northern Ireland? Was he Eastern Bloc? He turned out to be a German visitor (who had studied in Northern Ireland) his name was Stefan and he’d been moved to write a poem about Europa Point. He and his friend Mike had been there earlier in the day, then later while having a drink at The Horseshoe asked the barmaid “Is there anything interesting to do in Gibraltar tonight?” and she told them to go to The Kasbar.

The vegan chef is a wonderful young woman called Claire who was born in Gibraltar but then moved to Canada with her family at the age of 11. She is now back as “the Canadian winters were just too long”, her culinary skills are great but then she stunned us all as she got up and with her little black book in hand recited some beautifully delicate original pieces. Claire was a first-timer but I am sure we will see her back next time, I hope so.

Now cometh the Spaniards! Yes, there were Gibraltar-loving Spaniards in town who took no shame in proclaiming their love for the Rock. Two from Seville, a guitarist from La Linea and the incredible Clemente. His calling card said ‘Painter-Sculptor-Goldsmith’ but this man was a poet and a real performer. He was from Cordoba and looked like a cross between Roger Federer and Quentin Tarantino. He thrilled us all with a poem about Andalucia, he then sang some songs and even did some funny dancing. The night was long in a good way and everyone ended up talking to each other on the steps of the Calle Comedia, those Germans stayed to the bitter end and have vowed to come back soon. All-in-all a wonderful cultural experience with people of all ages and races coming together and making-merry. Who said poetry was boring?

In front of church and mosque

Except for the houses of the rich

The cannon pointed towards Africa

The Union Jack without Europe’s flag

N.B The title of this blog is taken from ‘The Queer Song’ by Rebecca Faller