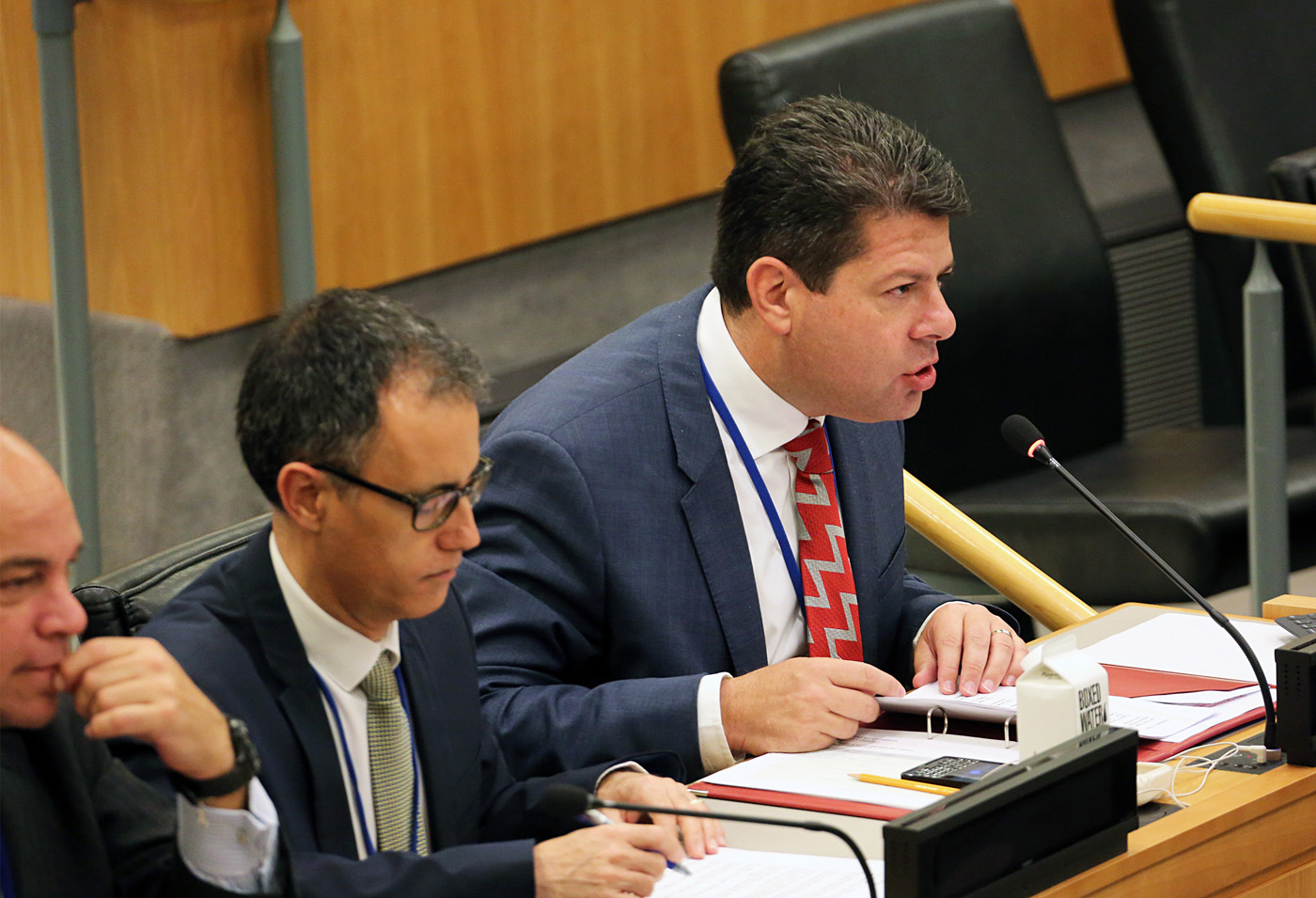 Chief Minister’s Address To The UN Committee Of 24

Here’s the full text of Fabian Picardo’s address to the UN’s Committee of 24 in New York yesterday:

Let me start by sincerely congratulating you on your appointment as the Chair of this important Committee.

Eighty years ago, at the start of the Second World War, Gibraltarians volunteered to form the Gibraltar Defence Force.

Seventy five years ago, as that War drew to a close, there were Gibraltarians also in the D-Day operations.

From the first moment, those Gibraltarian soldiers had the X-factor - bravery, courage and determination – just as their successors do today in the Royal Gibraltar Regiment, whose tie I proudly wear.

Fifty years ago almost to the day, the fascist regime of General Franco closed the frontier between Gibraltar and Spain.

His strategy was to isolate Gibraltar physically and economically.

The last siege of the Rock started days after our 1969 Constitution came into effect.

Franco’s siege was designed to strangle us in every respect.

To bring us to our knees in surrender.

The prediction made by the Spanish Government was that Gibraltar would ‘fall like a ripe fruit.’

In taking that barbaric action, General Franco cared nothing about the human aspects of the closure.

Mothers’ and fathers’ hearts were cruelly broken when told that they could no longer see sons or daughters living on the other side of the frontier.

Families shed years of tears as the enforced separation kept them away from the loving embrace of close relatives who lived just a kilometre or two away.

With all communications also cut, contact was maintained only by shouting news to relations across a 100m no-man’s land and by record dedications on Radio Gibraltar.

We were even deprived of oxygen for our hospital patients.

Thousands from both sides of the frontier left their families to emigrate looking for work.

They formed a diaspora that will never now return home.

This was what General Franco and his foreign minister, Snr Castiella, were prepared to do to force us to surrender our land.

Indeed, Madam Chair, it is important for members to note that the General Assembly Resolutions that Distinguished Representatives of Spain repeatedly refer to in interventions before your Committee were adopted following intense lobbying by that same fascist Government in Madrid.

They must be seen in that light. Nothing to be proud of.

And the closure of the frontier was just another tactic on their behalf to force us to capitulate.

But we would not bend to their will.

Despite the economic strangulation that was intended to be the key to our surrender, we worked.

We benefited from the friendship and support of our neighbours in Morocco.

We enjoyed the fulsome support of the United Kingdom.

For thirteen years the frontier stayed closed, even after the dictator was dead.

We did not ripen.

And we did not fall.

We did not surrender or succumb.

And now, half a century has passed.

You can see for yourselves what a massive failure that last half century has been for those who have sought to subjugate the people of Gibraltar.

He came up against the Gibraltarians and he lost.

And everyone who has come after him has failed.

The only thing his steel gates attracted was rust.

But the last siege of Gibraltar forged the iron will of the people of Rock.

It sealed our separate and distinct identity.

It gave shape to our modern reality.

Now anyone who attempts our economic strangulation, our forced subjugation is on notice that they too will fail.

Because, while have never turned down friendship or cooperation, we will always stand up for our right to determine the future of our homeland.

We will always defeat any foe, however mighty, who seeks to remove us from our homeland.

And fifty years on, we are not just still standing.

We provide 15,000 jobs for cross frontier workers, many of them Spanish.

“The arc of the moral universe is long, but it bends toward justice.”

To do justice, in our case, Madam Chair, I once again urge the Committee to send a visiting mission to Gibraltar.

To come to see our home for yourselves.

And to do justice by finally removing us from your list.

Madam Chair, I note that our repeated invitations for a visiting mission to come to Gibraltar are not reflected in your recitals of your Draft Resolution A/AC.109/2019/L.5 The record should be corrected and a recital added to reflect our annual invitations to visit Gibraltar - we have even offered to fund them. The record is deficient if our offer and requests are not reflected in the recital of your resolutions.

This committee has insisted that as long as there is one territory left on your list the eradication of colonialism will not be complete. We agree.

Even if we are the last one;

The day will come when we shall take our rightful place in the family of nations.

When that day comes we trust it will be with the support of Spain as a friendly neighbour.

For now, Madam Chair, as we reluctantly prepare to leave the European Union with the United Kingdom, we have used the opportunity for dialogue with Spain to reach practical arrangements on cooperation.

These deal with areas of historic friction and mutual irritation which we wish to see resolved through dialogue and cooperation.

We note that the success of the Socialist Party in recent elections in Spain will enable us to return to a mutually respectful and mutually beneficial dialogue.

Already we have entered into a Tax Treaty with Spain.

This demonstrates – as we have always insisted – that we are entirely transparent in matters of taxation.

Spain recognises also our distinct and independent tax authorities as totally independent from those of the UK.

Perhaps most importantly for the purposes of this Committee, Spain has now also recognised the existence and legal status of the Gibraltarians as distinct from British citizens generally.

This tax treaty is the first treaty with Spain in relation to Gibraltar since the historic Treaty of Utrecht in 1713.

It is fitting that the modern Spain should finally have recognised the distinct people of Gibraltar in this international instrument.

Additionally, agreement was also reached on tobacco pricing and cooperation between our law enforcement agencies, notably the police and customs.

Those arrangements on tax, tobacco and law enforcement effectively dispose of the untrue and unfair criticisms of successive Spanish Governments.

There are no longer any issues left between us on these economic and law enforcement matters – none of which ever related to our inalienable right of self determination anyway.

I am very pleased that we have been able to enter into these arrangements which we have negotiated directly with the Spanish Government.

Madam Chair, I will continue to defend Gibraltar’s right to self-determination and its territorial integrity.

The recent Advisory Opinion of the international Court of Justice on the separation of the Chagos Archipelago from Mauritius makes it very clear that the right to self-determination of non-self-governing territories is paramount, and that our territorial integrity cannot be interfered with during the decolonization process.

Spain contends that her territorial integrity is at stake in the decolonization of Gibraltar, despite the fact that she ceded Gibraltar ‘for ever’ in 1713.

As we have said many times, we would welcome an Advisory Opinion from the ICJ on this issue.

When we get a fair and objective hearing, we know that we will prevail.

Madam Chair, Gibraltar finds itself where your own country was a generation ago.

We are asking to be treated no differently.

The future of our country must be freely and democratically decided by the people of Gibraltar in exercise of the right to self-determination.

There can be no other way.

There will be no other way.

However long this Committee keeps us waiting.