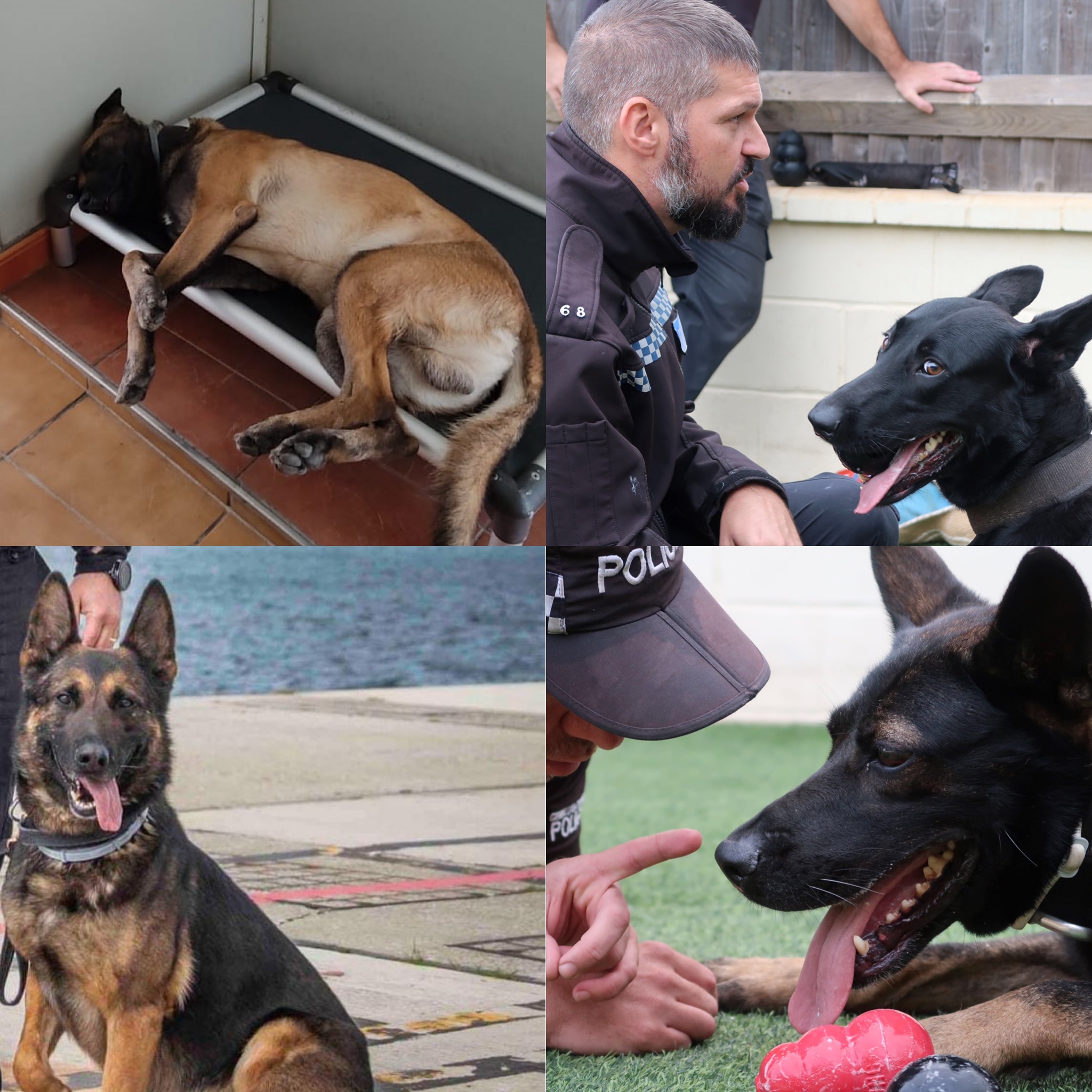 The Gibraltar Defence Police currently has over 10 working dogs which are based at its headquarters in Devil’s Tower Camp.

This includes three breeds of dogs – German Shepherds and Belgian Malinois, who all work as general-purpose dogs and a Springer Spaniel, known as sniffer dogs, who can find illegal drugs, quantities of cash, explosives, and digital media storage devices, such as hard drives and SIM cards.

Six years ago, the kennels had a major renovation where heated floors were installed for those cold winter months and air conditioning for those warm summer days. A one-way glass window also installed to allow the dogs to have some privacy. There is a hatch that leads to a larger outside area so the dogs can go out and stretch their paws.

As well as changes to the inside kennels, the outside compound now consists of a separate exercise area featuring grass and play equipment such as tunnels and an agility ramp to help stimulate the dogs and encourage play. At the back of the establishment there is a shower room, a medical room and of course, the room that holds their tasty food.

A former GDP Officer, Melvyn Brier, created a memorial area where he handcrafted a plaque for those Police Dogs who dedicated their working lives to the force.

The dogs receive basic training at the Defence Animal Training Unit in Melton Mowbray, UK, and are then flown over to Gibraltar where they carry out an intensive 8-week course with their new handler and PC Mario Johnson.

Once they pass, they are recognised as a licensed police dog for a year and continue to partake in training throughout their career.

Chief of Police Rob Allen, said: “Police dogs are a valuable asset to operational policing and a well-loved part of the Gibraltar Defence Police family, as well as the general public.

Members of the public can rest assured that our four-legged constables are well-looked after in five star accommodation.”

It is common knowledge that dogs can follow a scent trail or identify a specific scent which is undetectable to humans. That is why it is crucial that the police dogs are fully trained.

Dogs are often referred to as man’s (or woman’s) best friend but for officers who spend all day everyday with their furry companions, it’s more than just a friendship, it’s a bond like no other. And the dogs at the GDP are spoilt for choice with seven handlers to look after them.

By the age of 7, the dogs are usually ready to hang up their K-9 badges and enjoy spending the rest of their days relaxing. The dogs will either retire locally or they will be sent back to the UK to be rehomed. This December, PD Anja will be retiring and moving in with PC Sodi.

Let’s take a look at a few of the four-legged crime fighters...

Mira, a female German Shepherd who joined the GDP in March 2017, is six-years-old. She likes pawtrolling football matches – occasionally trying to play with the ball herself - on Devils Tower Camp and dislikes walking in the rain....don’t we all!

PD Mira is the only Police Dog in Gibraltar that has been allowed onboard and photographed on the Prince of Wales Aircraft Carrier, which is pretty pawsome.

Oskar, a male Belgian Malinois who joined the GDP in December 2020, is three-years-old. He loves cuddles and playing with his toys and dislikes swimming in the sea. Oskar is the largest Belgian Malinois the GDP have had in the past 5 years, weighing in at 45kg.

Arry, a male Belgian Malinois who joined the GDP in March 2021, is only two-years-old. He loves playing with other dogs but dislikes Oskar. Poor Oskar. As like many humans, Arry dislikes mornings.

There is also Koko, Molly (our very own TV celebrity from Cops on the Rock) Millie, Hindi, Trey, Anja, Rayco and Robyn who are part of the K-9 Pawtrol. 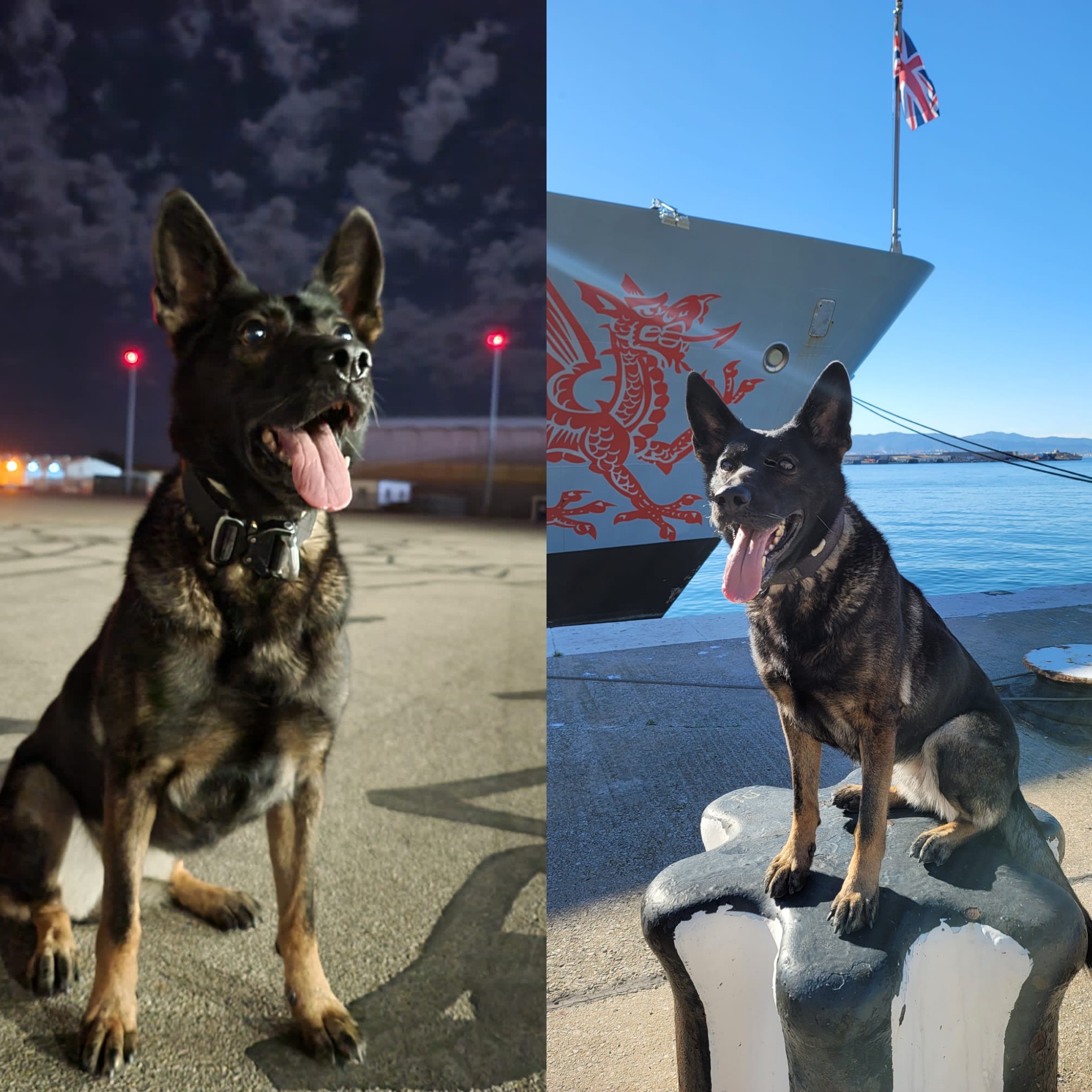