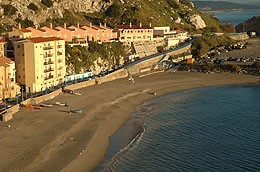 According to Government reports, the results of the analyses undertaken on the dust problem at Catalan Bay confirm that the issue originates from the use of dredged sand following the beach replenishment work undertaken by the previous administration.

Samples of sand have been taken at different depths in various locations throughout the winter period and these indicate a very significant reduction in the amounts of fine particles, which is the portion that becomes airborne and caused the dust clouds experienced last year.

It has been noted that due to the number of storms experienced this winter, the sand has been cleaned naturally and the amount of fine particles present is now less than what naturally exists on most beaches. The Government insists that it is their policy to monitor the situation once again.

Minister for Tourism Neil Costa explained, ‘the decision was taken to set up a monitoring programme to assess and quantify the problem and also set about identifying a solution to effectively clean the sand via the use of a technique known as soil washing.’

He added, ‘an inter-ministerial group was set up, consisting of the Ministers with responsibility for tourism, the environment and technical services, with officials, to steer this. As it happens, Mother Nature has thankfully done the work for us and I am assured by my technical advisors that the level of dust remaining is now well below what would naturally be occurring on any beach’.