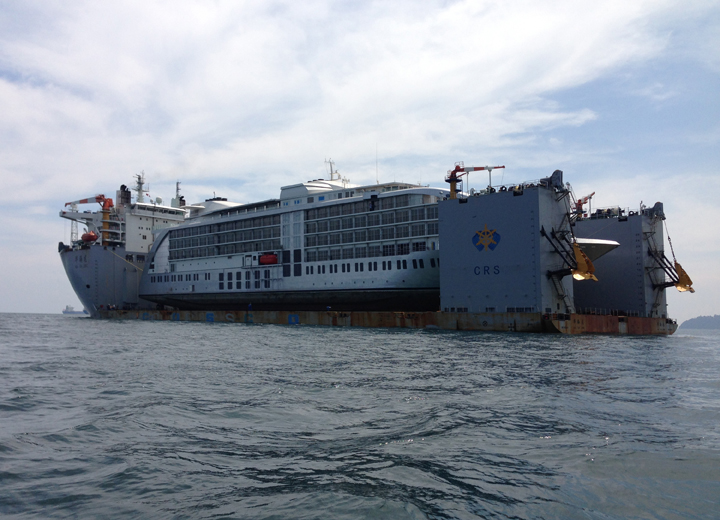 As the sun came up this morning, Sunborn Gibraltar entered territorial waters after a month-long passage from Sunborn Marine’s shipyard in Malaysia.  Weather permitting, ‘float-off ops’ from her transportation vessel will commence 6.30am tomorrow and, aided by tugs, she’ll cruise into Gibdock under her own propulsion ready for minor preparatory works.

Martyn Brown, Director of Clifton Ship Agency, comments, “We have been has been coordinating Sunborn Gibraltar’s arrival since April, acting as a single point of reference for the Port Authorities, Government, tug operators, pilots, rope handlers, marine surveyors, Gibdock, the captain of the heavy lift vessel and Sunborn’s own ship captains.  Fortunately the forecast is good for a safe float-off tomorrow, but one factor we cannot predict or control is the tidal current in the Bay of Gibraltar.  All being well, preparations for submerging the heavy lift vessel will begin tonight with float-off at 6.30am.  Sunborn Gibraltar should be in her Gibdock berth by 9am.”

Martyn continues, “Intensive planning and cooperation with all of the aforementioned agencies has been critical to reach this point in the operation and we, acting as Port Agent on behalf of Sunborn Gibraltar, extend our grateful thanks for the time and effort spent by all in reaching the culmination of what will be completion of the first phase of operations tomorrow.”

Brian Stevendale, CEO for Sunborn Gibraltar, says, “This is a huge news story for Gibraltar, the arrival of the world’s first five star yacht hotel on our shores.  She’s a stunning piece of workmanship and over 3,000 experts from across the world have been involved in her development and construction – a project of a monumental scale.  Not only will she provide a much needed luxury hospitality and events venue for Gibraltar, but she will also create 200 permanent jobs for local people.  When the Chief Minister returns from the UN Committee in New York on Thursday, we’ll be inviting him down to Gibdock to take a look.”

Sunborn Gibraltar’s delivery on a heavy lift vessel is the industry norm.  Although an ocean-going vessel with her own engines, the new yacht hotel was transported from South East Asia in order to protect her over the long journey – and indeed get her here faster – in the same way that superyachts are moved around the world.   The transport ship used is the world’s largest and Sunborn Gibraltar avoided the risk of both piracy and rough conditions damaging her superstructure.

Ready to welcome guests in the second half of 2013, Sunborn Gibraltar is the latest 150 million euro addition to the revolutionary floating hotel fleet.  Standing proudly in Ocean Village Marina, set against a backdrop of the iconic 1,400ft ‘Rock’, Sunborn Gibraltar counts 189 guest rooms, 90% of them with outdoor space, and all with full-height glazing to capture the Mediterranean views.

142 metres long and a height of seven storeys, Sunborn Gibraltar exudes five star elegance in its rooms, Spa and fitness centre, cocktail lounges, fine dining restaurants and grandiose ballroom – the ultimate setting for a lavish celebration.  Conferences and events are equally well catered for in flexible meeting space for up to 540 delegates.

Sunborn Gibraltar is an essential addition to the territory’s hospitality offering and meets a growing demand for luxury hotel and convention facilities in a flourishing economic environment.  Visit Sunborn Gibraltar’s dedicated website www.sunborngibraltar.com