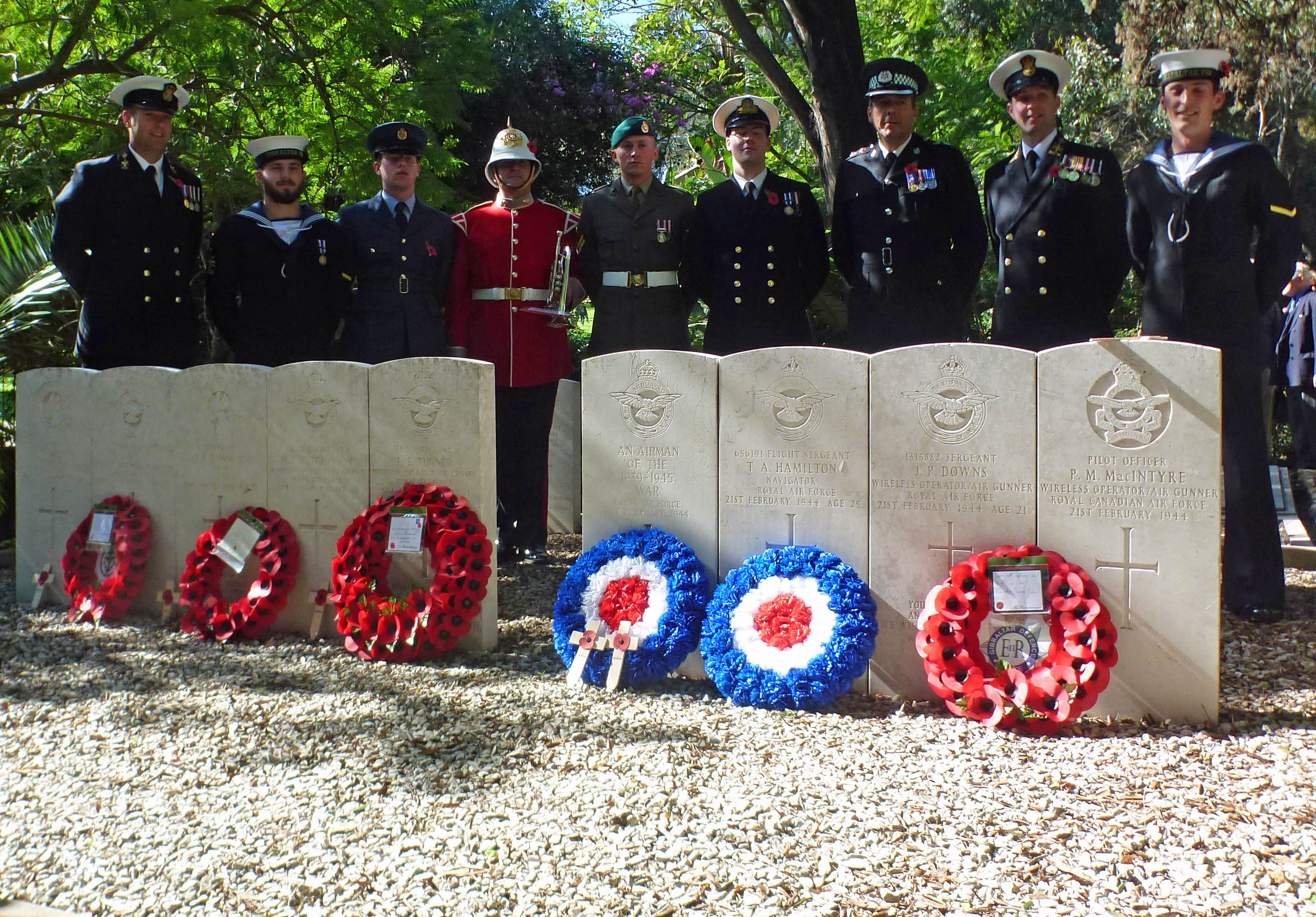 In the heart of Tangier, not far from the centuries old medina, lies St Andrew’s Church – the ‘English Church’ – and surrounding it, a small leafy graveyard. An oasis of calm in frantic Tangier, one could almost be in an English village churchyard.

Amongst the Christian graves in the churchyard, is a section of Commonwealth War Graves, all kept in pristine condition by the ex-pat community in Tangier. There are thirteen graves in all: the final resting place of twelve Allied Airmen who lost their lives as a consequence of action in North Africa during the Second World War. The thirteenth grave is that of Sergeant Terence Henning of the Gibraltar Security Police (GSP). Elsewhere in Tangier, there are three more War Graves – two in the Catholic Cemetery, those of PC Charles Curtis and PC Stephen McKillop, and a further grave in the Jewish Cemetery, that of PC Abraham Attias – all three GSP officers.

On Sunday 9 November, with Private Sean Yeo, a bugler from the Royal Gibraltar Regiment having played the poignant notes of the Last Post, wreaths were laid at the graves by HM Ambassador to Morocco, Mr Clive Alderton, the Assistant Defence Attache WO Adele Johnson, the Commanding Officer of HMS Scimitar Lt Alex Knight, an RAF representative SAC Blue Garraway and the Chief Police Officer of the GDP, Ch Supt Rob Allen.

On 6 February 1942, the Bland ferry ‘Rescue’ departed from Gibraltar, bound for Tangier on a routine crossing. On board among the other passengers were several Gibraltar Security Police officers, tasked with escorting the diplomatic baggage from the Governor’s office in Gibraltar to the British Consulate in Tangier. Unbeknown to the police officers and other passengers, the diplomatic baggage contained a large quantity of explosives and detonators, together with various propaganda leaflets. The explosives were destined for use by the Special Operations Executive against German signal stations that were threatening the safety of Allied ships in the Strait.

As the ferry came alongside in Tangier it was met by a crowd which included many previously evacuated Gibraltarians, eager for news from home. Also on the quayside were more GSP officers who had been providing armed protection for the British Consulate and who were to be relieved by their colleagues on the ferry.

As the baggage was unloaded onto the quayside, perhaps as a consequence of rough handling, maybe due to the effect of dampness on the dockside – we will never know – the explosives contained within the bags detonated and a massive explosion tore through the air. As the smoke cleared, and propaganda leaflets fluttered to the ground, the normal bustling dockside scene had been replaced with one of carnage. Over twenty people lay dead – including four GSP officers. Many more were injured.

For the GSP, a tiny force in a small community, this was a devastating blow. For the families and friends of the fallen officers, even worse. At least two children were to grow up never knowing their fathers. For many others the events of that day would not be forgotten for a lifetime.