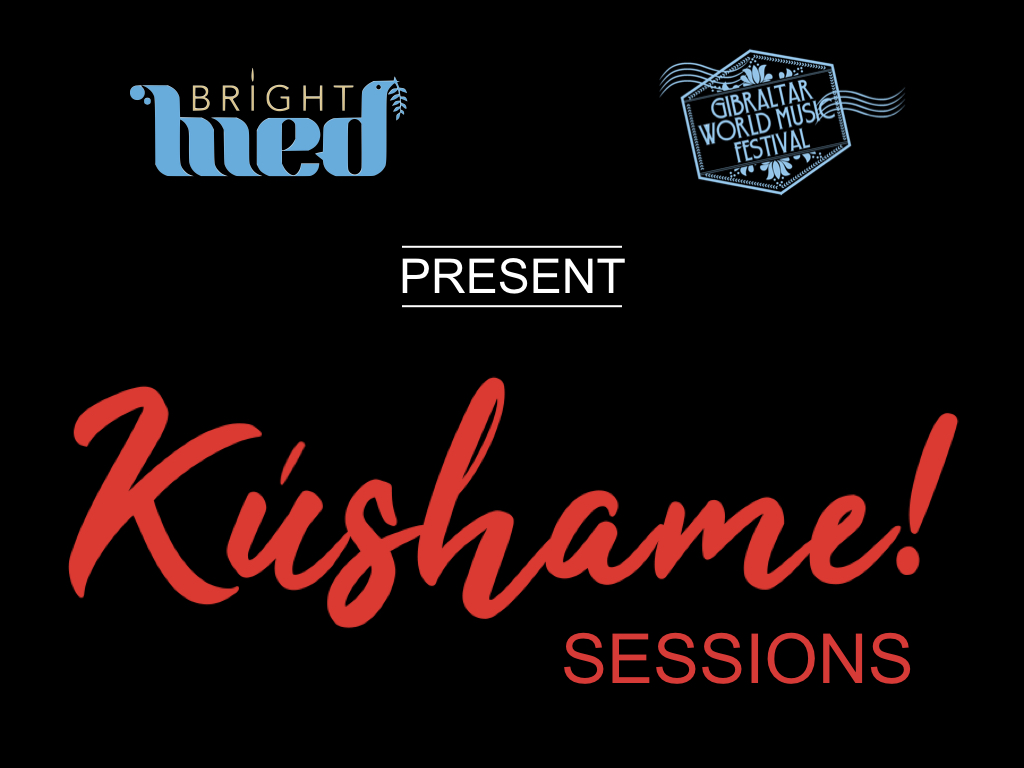 The BrightMed team has announced the launch of the Kúshame! Sessions, a series of online interviews with artists and professionals of the music industry all around the world to talk about culture and music which can be viewed live on Zoom and also recorded on BrightMed and GWMF social media pages. The Kúshame! Sessions are hosted and directed by Yan Delgado, founder of BrightMed, Ruth Fisher, journalist at Jazz FM, and Jose Luis Martinez, from the Gibraltar World Music Festival.

‘Kúshame!’ which means ‘Listen to me’ in Yanito, is becoming a label allowing artists from Gibraltar and abroad to express their creations and also their concerns during the COVID-19 time. The Kúshame! Sessions have been and still are a meeting where musicians and professionals of the culture industry are debating about the future of the sector.

The Kúshame! Sessions started last June with the presence of Quarter to Africa, an Israeli band which came to Gibraltar in 2018 for the Gibraltar World Music Festival ‘Borders’. Following the success of the first session, the series of interviews has continued with the singer and composer Nani Noam Vazana, artistic director Barak Weiss, vocalist Daphna Levy and the bass master and producer Yossi Fine.

Next Kúshame! Session will be next 30th July at 17.00 CEST with Israeli guitarist and producer Yossi Sassi who merges traditional and contemporary music. He is the inventor of the "bouzoukitara" musical instrument. Zoom details as follows: https://us02web.zoom.us/j/86034429623

Quarter to Africa: https://youtu.be/8tqhmcIT35w
Quarter To Africa is a multi-cultural roots ensemble. Their music creates an uplifting collage, fusing traditional Arabic “makam" scales and African rhythms with jazz and funk. Into the creative process, ‘QTA’ weaves a philosophy that is built on three main principles: Love, Unity & Friendship. The result is a unique style which forms a fertile ground for fluid movement between composed and improvised, upbeat and downtempo, complicated and simple music. ‘QTA’ started as a duo in 2014 and slowly grew into a versatile ensemble: Oud, Saxophones, Trumpet, Electric Guitar, Bass, Drums, Percussion, Synthesiser, and Vocals.

Barak Weiss: https://youtu.be/ooZRCI6o40I
Barak Weiss is one of Israel's leading voices within its music scene as well as and a sought-after lecturer and adviser on business development and marketing for musicians and performing arts organisations.

Daphna Levy: https://youtu.be/JTuf376nZlE
A natural storyteller, Daphna Levy is a master of her own voice. Her vocal artistry ranges from dynamic and gutsy to bluesy and sultry. Improvisation is Daphna's second nature, and her sound and style are often described as reminiscent of Sarah Vaughan. She is also a songwriter and arranger. Daphna Levy was born and raised in Tel Aviv. Descending from a cantor lineage and a member of the Levy ancient tribe of spiritually elated musicians, she grew up with a deep passion for music. At the age of ten, attending a Gospel choir live concert made her realise that singing was her calling.

Yossi Fine: https://youtu.be/Xiv660krRZs
Yossi Fine, Bass master and producer, one of the most well known musicians and producers in the world today. Grammy nominated, producing over 40 albums around the world, achieving 20 gold and multi-platinum albums. Yossi has produced, recorded and played with David Bowie, Lou Reed, Gil Evans Orchestra, Vieux Farka Toure and many others. Yossi plays bass and a special guitar he built, playing traditional songs and hits from the blue desert.