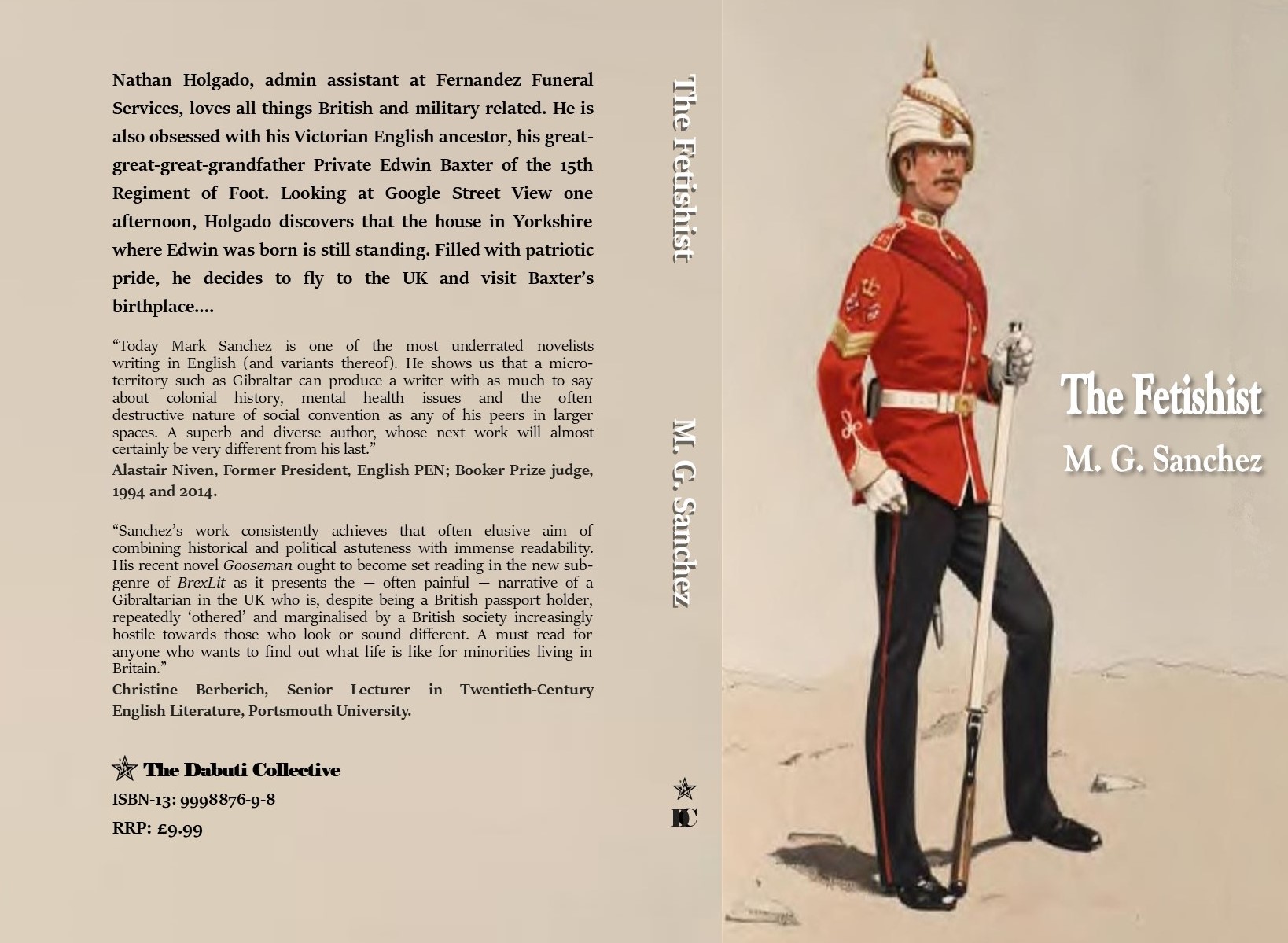 From the moment I opened The Fetishist, the latest novel by M. G. Sanchez, and read the first page, I knew I was on to a winner. Described by two-time Booker prize judge Alastair Niven as “one of the most underrated novelists writing in English today”, Sanchez has once again put Gibraltar on the literary map with a thought-provoking novel that will delight and shock local readers in equal measure. Set in Gibraltar and then in Yorkshire, The Fetishist skilfully explores some of the less salubrious mindsets and currents of thought underpinning our local community. Its protagonists are Nathan Holgado and Manuel Holgado, a ‘more-British-than-the-British’ Gibraltarian father and son who every Saturday march up and down Main Street dressed as eighteenth-century redcoats, intent on recreating what they see as the glories of Britain’s imperial past. Without giving any of the riveting plot away, I can tell you that Nathan flies to the UK on a mission to track down the birthplace of Edwin Baxter, his one identified British ancestor. The story then takes some very surprising twists before arriving at a nail-biting ending. What I like best, and most admire, in this work is the marvellous development not only of the plot, but also of Nathan Holgado himself, who by the end of the novel is a very different creature to the one who appears in its opening pages.

Like all of Sanchez’s novels, The Fetishist explores themes that everybody in Gibraltar is aware of, but few writers are prepared to tackle head-on – in this case, nationalism, xenophobia, racism, and colonial subservience and delusion. It even delves into Brexit and touches on Covid-19 in the second half of the novel. The narrative is pitch-perfect; Sanchez has the wonderful ability to illuminate and move us with his prose. He could easily have portrayed Nathan and his father Manuel as grotesque stock types, for instance, but he treats them both with great sensitivity and humanity, making us feel sorry for them despite their very obvious character and ideological flaws.

This is a powerful yet subtle tale, a rich and challenging psychodrama with echoes of Sanchez’s equally brilliant novel Gooseman, which was published last year but, sadly, despite being lauded by Professor Robert Newcomb of the University of California as “Gibraltarian literature’s most detailed and expansive character study”, is still not available for purchase in our bookshop-less town.

The epigraph at the head of the novel sums it up beautifully: “An invented past … cracks and crumbles under the pressures of life like clay in a season of drought.” (James Baldwin).

M. G. Sanchez’s The Fetishist will be officially launched on November 24 at an online event organised by the University of Basel.  The novel is available on Amazon in both kindle and paperback form on this link: https://amzn.to/2Z2YO7d