Jan 31 - The Governor on this Morning's Incursions 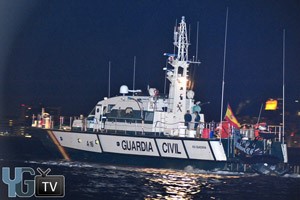 The Governor said:
‘These continuing actions by Spain are a matter of deep concern.  The recent increased level of unlawful incursions into BGTW by the Guardia Civil is an unwelcome and unacceptable escalation of what is already a difficult situation.  The recent petition I received was a potent reflection of the depth of feeling in Gibraltar.

I continue to liaise closely with the Chief Minister and HM Government of Gibraltar in relation to these events.   The Convent has ensured that my views on these recent developments and attempts by Spanish State vessels to exercise jurisdiction are raised directly with the Minister for Europe.’

Warnings were read by the Royal Navy Gibraltar Squadron and the vessel departed BGTW.  The British Embassy Madrid will make an immediate formal protest with the Spanish Ministry of Foreign Affairs about today’s incident.