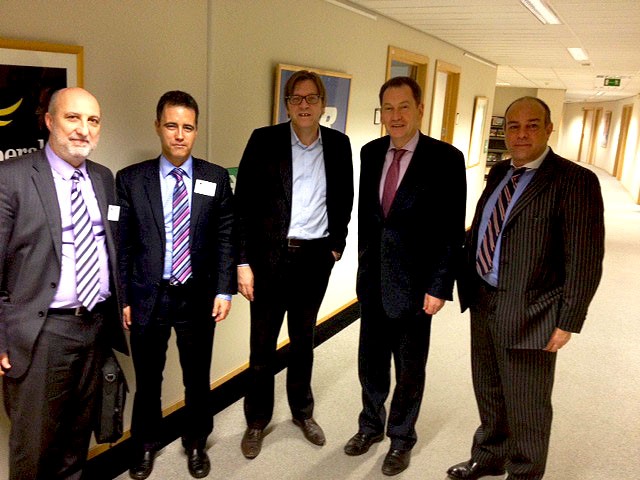 During their time in Brussels, the Chief Minister and Deputy Chief Minister met with a number of European Parliament delegates to discuss a vast range of Gibraltar’s issues. During a meeting with Gibraltar Liberal Democrat MEP, Sir Graham Watson and two European Commissioners, Mr. Picardo raised the issues of queues at the Frontier, on-line gaming, taxation and home affairs.

Commissioner Michel Barnier, who is responsible for the Internal Market and Services accompanied the Government delegation to the meeting. A detailed dossier on the delays at the frontier was presented to Commissioner Anna Cecilia Malmstrom, who is responsible for Home Affairs. The document included photographs, statistics, press cuttings and details of the frontier queue website.

The Government delegation, which also includes the Chief Secretary Ernest Gomez, the Chief Legal Adviser Michael Llamas and UK Representative, Albert Poggio, then met with German Liberal MEP Jurgen Creutzmann, the Shadow Rapporteur for the Alliance of Liberals and Democrats for Europe Group. The Chief Minister has also hosted a lunch during his time Brussels. This was held at the Gibraltar Office for the UK representation in Brussels.

Deputy Chief Minister DR. Joe Garcia attended a series of meetings with the European Citizens Action Service and the Environment directorate of the European Commission, where he explained the current situation with Spain’s proposed ‘Estrecho Oriental’ site that overlaps with the Southern Waters of Gibraltar.

Civil Aviation matters were also discussed with the European Commission. Dr. Garcia stressed the importance of not allowing the Spanish Government to turn the clock back through the introduction of the Gibraltar exclusion clause in such legislative measures.