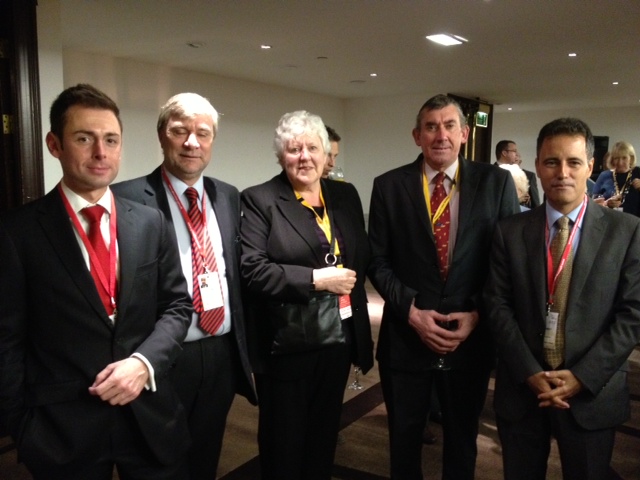 The Deputy Chief Minister Dr Joseph Garcia had the opportunity to discuss Gibraltar related matters with the Deputy Prime Minister Nick Clegg at the Liberal Democrat party conference in Glasgow. Dr Garcia was seated beside Mr Clegg during one of the conference dinners.

Dr Garcia took the opportunity to thank the Deputy Prime Minister for his own involvement in the issue by talking to his Spanish counterpart and expressed the gratitude of the Government and the people of Gibraltar at the staunch support which continues to be received from the UK Coalition Government of which the Liberal Democrats are a part.

The Gibraltar Government delegation in Glasgow includes the Minister for Tourism, Commercial Affairs and the Port Neil Costa and the Minister for Heritage, Culture, Sports, Utilities and Youth Steven Linares.

There has been a considerable level of interest in Gibraltar during this conference given the high-profile that the problems with Spain have generated in the UK and international media. The Gibraltar stand at the exhibition centre in the conference hall has received continuous messages of support from UK Government Ministers, Members of Parliament, MEPs, Peers, local Councillors and ordinary members of the Liberal Democrat party. The reality is that everyone seems to be aware of what has been happening in Gibraltar, particularly of the deliberate queues created by the Spanish authorities at the border.

In addition to this, the conference edition of the magazine "The Liberator" included an article from Dr Garcia, which explained the background to the present situation and criticised the actions of the Spanish Government against Gibraltar.

The Gibraltar Government delegation met with members of the Falkland Islands Government and also attended special closed briefings for visiting diplomats which allowed the opportunity to talk to representatives from other countries. This included an insight into economic matters by the Secretary of State for Business, Innovations and Skills Vince Cable MP and a brief on the run-up to the referendum on Scottish independence by the Secretary of State for Scotland Michael Moore MP.

The Gibraltar delegates also attended a function hosted by the South West region (Western Counties) of the Liberal Democrats for which Sir Graham Watson is also the MEP. This allowed the Gibraltar Government members to exchange views with different Liberal Democrat Members of the Westminster Parliament in the region.

Commenting on the conference, the Deputy Chief Minister Dr Joseph Garcia said, ‘Gibraltar has enjoyed a high level of political support in this conference as a result of the continuing problems with Spain. It is clear that the Spanish harassment at the frontier and elsewhere is totally counter-productive and is resulting in more and more friends being recruited to Gibraltar's cause. Steven Linares, Neil Costa and I were able to impress upon delegates the hostile, unfriendly and confrontational approach of the present Spanish Government who have turned their backs on dialogue with Gibraltar. This conference has been a very useful platform for the Gibraltar Government to put across its views.’