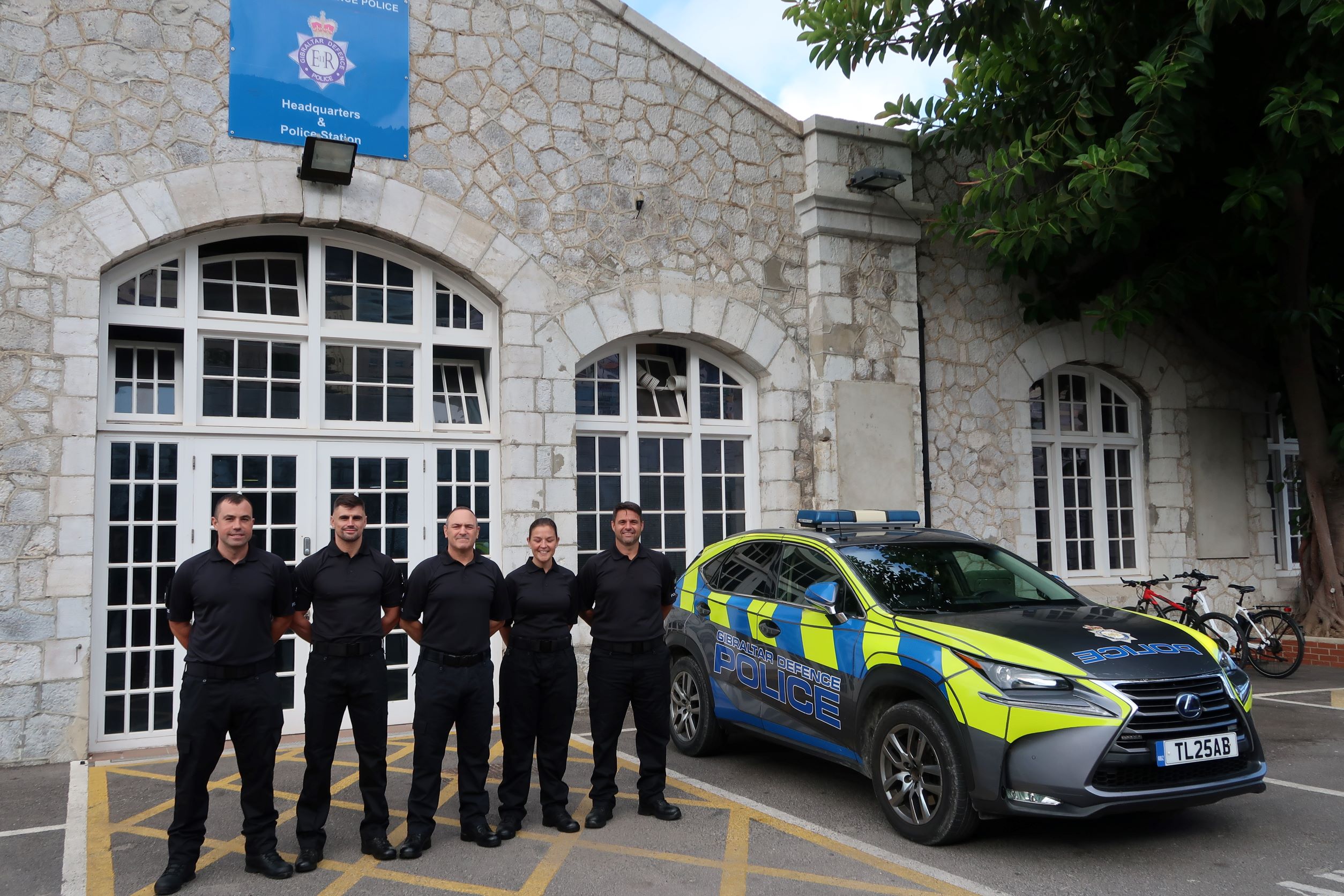 The Chief of Police, Robert Allen, has announced five recent promotions within the Gibraltar Defence Police.

A statement from the GDP follows below:

Police Sergeant (PS 30) Jansen Guy joined the Gibraltar Defence Police (GDP) in  2012 and served most of his initial career in the Operations Division. He began his  duties as an Authorised Firearms Officer (AFO). He has trained in a number of firearms tactics which included building entry, vehicle and less lethal options. In 2014, he qualified as a Marine Officer and regularly assists in Maritime Operations. Sergeant  Guy was trained by the Essex Police as a Detective in 2016 and most recently undertook a Licensed Search Officer (LSO) course held by the College of Policing in  Coventry. He has completed his (Honours) Degree in Law and is in the last stages of  completing his Masters in Law together with a Legal Practice Course (LPC). Sergeant Guy, who has been in the service for 9 years, would like to follow in his grandfather’s  footsteps, who attained the rank of Inspector in the Royal Gibraltar Police (RGP). He  would like to continue to contribute to the success of the GDP assisting in the  modernisation of the organisation and achieve the goals set by the Chief of Police.

Sgt Guy mentions: “I look forward to this new challenge in my career. I will do my  best to ensure that all officers and members of the public are treated fairly and with  respect.”

Police Sergeant (PS 56) Jeremy Lopez joined the GDP in 2014 at the age of 25.  During his 7 years of service, Police Sergeant Jeremy Lopez has operated within the  Force’s Criminal Investigation Department as a Detective Constable (DC),  subsequently performing Acting Detective Sergeant (DS) duties followed by a  secondment to the RGP Economic Crime Unit (ECU). Sergeant Lopez is a qualified

Authorised Firearms Officer (AFO) and an Operational Firearms Commander (OFC).  His versatility also sees him carrying out Marine duties as well as being the shift  commander in his section. Sergeant Lopez has formed part of the Search Team as a  Licensed Search Officer (LSO) for over 5 years where he conducts dynamic risk  assessments to identify hazards or safety issues prior to and during searches. In 2018  he attended a Leadership and Management course held by the Ministry of Defence  Police (MDP). The 32-year-old ambitious officer aspires to develop in his newly  promoted Sergeant’s role and to contribute towards the modernisation of a successful  Police Force.

Sgt Lopez mentions: “I look forward to a new era in this force. The management of  officers will undoubtedly bring out the best of me. I’d like to thank the members of  the promotion board who believed in me.”

Police Sergeant (PS 89) Ryan Casciaro joined the force at the tender age of 19  and has been in the force for 18 years. Sergeant Casciaro commenced his career in the B relief, which is now known as the Blue Section, with his father and brother who  were serving GDP officers at the time. Moving forward, he joined the Criminal  Investigation Department (CID). He gained vast experience on the operational side  until he was seconded to the RGP Serious Crime Unit in order to further enhance his  investigative skills.

Sergeant Casciaro returned to the GDP with vast experience in case files and docket  preparation and took on a dual role as File Preparation Unit and Intelligence Officer.  He has been carrying out Acting Sergeant duties for approximately 2 years, before  successfully being promoted. Sergeant Casciaro is currently in charge of the Marine  Logistics and Support team which deliver an integral aspect of the naval base  protective security arrangements.

Sgt Casciaro mentions: “I am proud to be a member of this organisation. This promotion will motivate me more, thus ensuring that all the force’s core tasks and  objectives are being met daily. I need to complete an annual report, carrying out  Continual Professional Development in order to achieve this objective. I am looking  forward to this venture that I have embarked in.”

Police Sergeant (PS 82) Kimberly Beer Martinez joined the GDP in January 2017  at the age of 24. Following operational deployment in general policing duties she  became the duty controller for Blue Section where she was responsible for deploying  GDP assets to attend incidents and ensure vital communication with other

stakeholders. After successfully completing the Firearms Course she was deployed  as an Armed Response Officer. Sergeant Beer Martinez was selected to form part of  Project Servator which provided her with an insight into new policing tactics aimed to  deter and detect criminal and terrorist activity while providing a reassuring presence

for the public. She was temporarily promoted to the rank of sergeant for a period of  seven months, where she led an operational section alongside a fellow sergeant. This  opportunity provided her with an overview of the wider vision of the GDP output  requirements affording her an opportunity to deliver the key outputs from a more  strategic point of view. She successfully passed the Licensed Search Officer (LSO) course in the UK, carrying out numerous search operations throughout Gibraltar.  Since November 2020 she has been seconded to the Criminal Investigation  Department in the RGP and has being involved in various cases including burglaries,  thefts and sexual assaults, enhancing her knowledge and experience. As a result,

she has built a strong relationship with the RGP.

Sgt Kimberly Beer mentions: “I’m excited to take the next step in my role as  Sergeant within the GDP and hope to provide the leadership needed to take the  force in the right direction.”

Police Sergeant (PS 57) Sean Cawood joined the GDP in January 2015 after serving  a full exemplary career within the Royal Gibraltar Regiment. He achieved the rank of  Senior non-commissioned officer. This equipped him with vast managerial  experience, commanding personnel & managing departments. In March 2017, he  embarked on a two-and-a-half-year period as temporary Sergeant commanding Blue  shift/Governance and Standards. From October 2020 till present he was tasked with  Stores and Logistics where he is responsible for procurement. He currently operates within the Governance and Assurance department. Throughout his career, Sergeant

Cawood has been entrusted with duties such as Court Liaison Officer, Force Exhibits Officer, Safety Health Environment and Fire advisor, Force Physical Training Instructor  and he is currently a Licenced Search Officer. His experience gained in all the above mentioned departments ensures close ties with other Law enforcement agencies and  stakeholders.

Sgt Cawood mentions: “The GDP Sergeant promotion process has proved to be an  arduous event, requiring a high level of resilience. I am pleased that all the hard work  has resulted in a successful outcome, providing me an opportunity to further develop  both myself and the greater Force where I will strive to achieve and progress in the  future.”

Chief of Police, Robert Allen said: “We had a strong field to select from and  delighted to be able to promote the five officers who all did exceptionally well in the  process.

“Given the specialist nature of the force, all newly promoted Sergeants will now need  to achieve Authorised Firearms Officer qualification within their first year of

promotion (unless they are already qualified) and then work towards achieving the  Operational Firearms Command qualification.”

“The promotions further strengthen the Gibraltar Defence Police command structure  and these officers will have a pivotal role in driving a program of change and  improvement that is already underway within the force.

“In addition to their general policing experience each brings a unique perspective to  the role, coming from different and diverse backgrounds.”