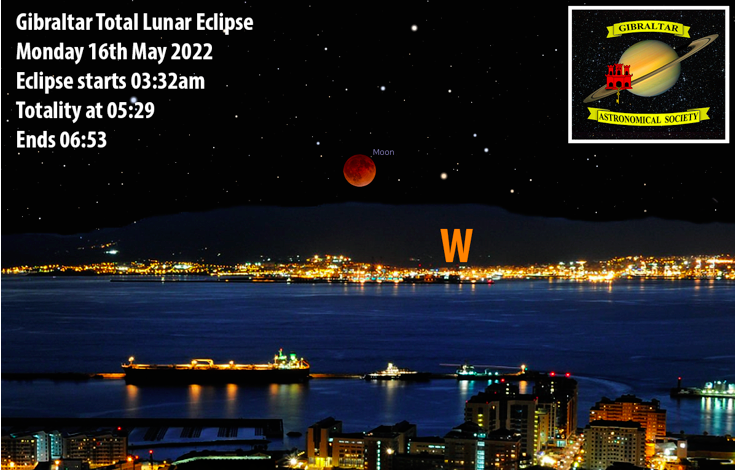 On Monday 16th May a total Lunar Eclipse can be witnessed from Gibraltar, although it will be too low in the horizon during its mid stage, when the Moon starts passing the Earth's shadow, to actually observe the event in its entirety.

The Gibraltar Astronomical Society has sent this guide to the event:

WHAT IS A LUNAR ECLIPSE?

Although scientifically a Lunar Eclipse does not have the significance of a solar one, one can argue that it still proves to determine a number of factors related to our planet.

Then the Moon is covered by three different shadows and they are defined as the following;

Penumbra - the outer part. (A light part of the shadow)

Antumbra – (a partly shaded area beyond the umbra.)

In our case in Gibraltar, we shall be immersed totally in the UMBRA at the maximum period of the eclipse, or the darker part of the shadow, and hence have a dark reddish hue once we reach the maximum.

WHY THE IMPORTANCE OF A LUNAR ECLIPSE?

Even though the Earth completely blocks sunlight from directly reaching the surface of the Moon, the Moon is still visible to the naked eye during a Total Lunar Eclipse. This is because the Earth's atmosphere refracts sunlight and indirectly lights up the Moon's surface.

Although we get the reddish glow on the Moon’s surface this has to do with the amount of debris or particles we have at the atmosphere’s level and this has to do mainly with volcanic activity around the globe.

If we are lucky enough to harvest the amount of volcanic ash there is in the upper echelons of the stratosphere, then this year we can expect a Blood Red Moon.

The ultimate importance of the eclipse is to determine the amount of natural pollutants we have in our atmosphere and thus define our overall status globally.

The maximum period of the Lunar Eclipse will be at 6:11am, when the Moon will be totally immersed in the Earth’s shadow. The totality of the event (that of which we can witness) will last 3 hours 21 minutes starting from 3.32 a.m. until 6.53 a.m. 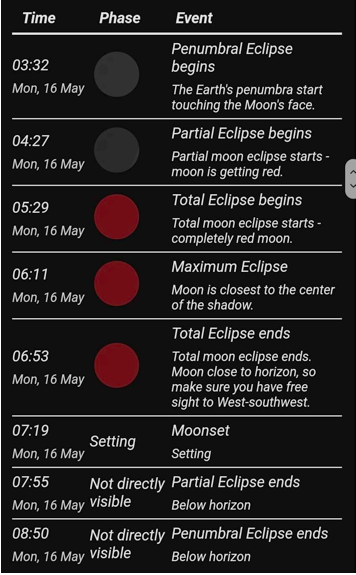