Jun 11 - RG Reserves Medal And Clasp Presentation At The Convent 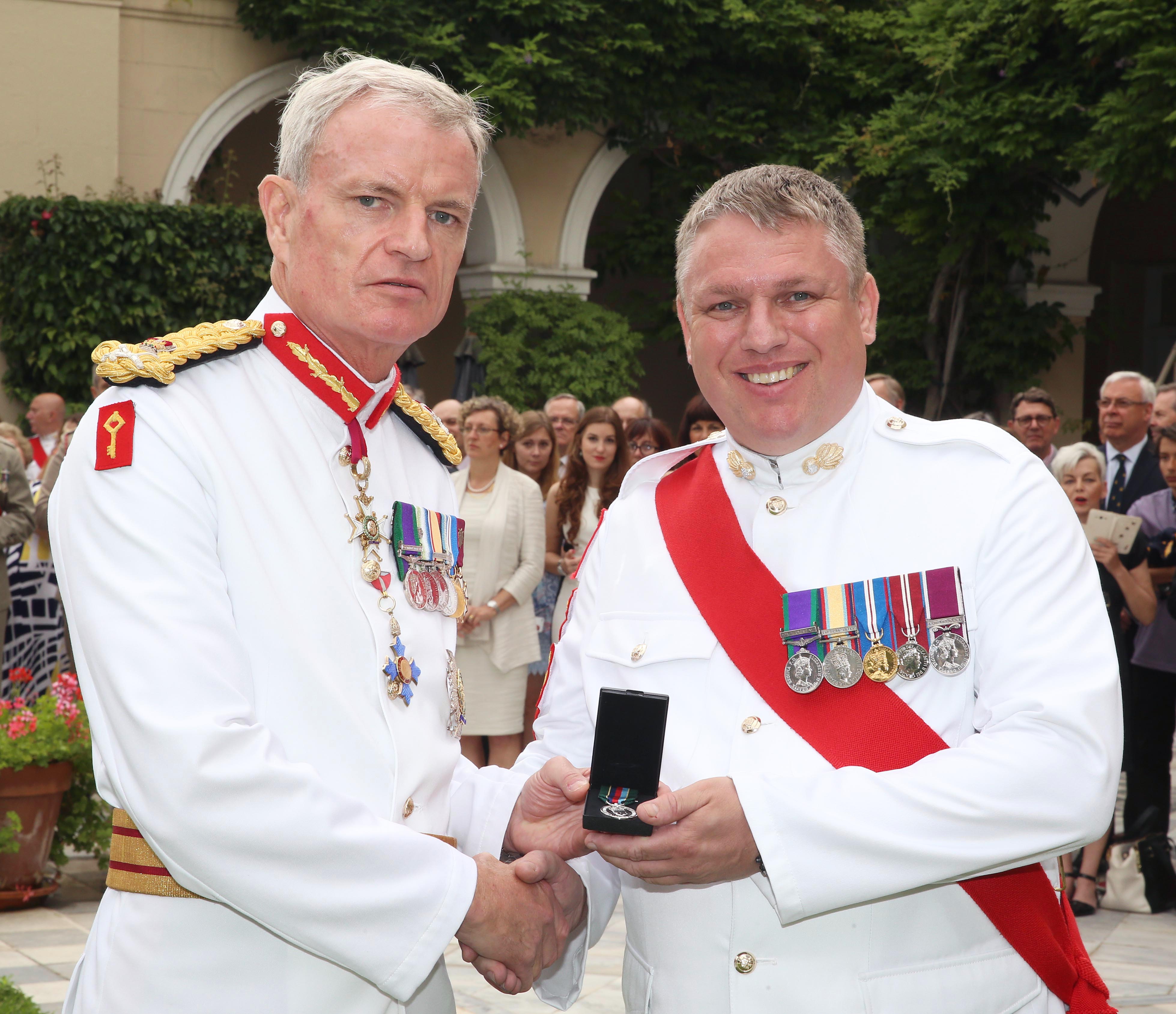 The VRSM is awarded after 10 years’ service in the Reserves in recognition of long and efficient service. A Clasp is awarded for each addition five years of service.

Sergeant (Sgt) Jack Evans was presented with his VRSM at the ceremony. Sgt Evans joined the Royal Gibraltar Regiment Reserves after serving 25 years of regular service within military music. During the final months of his regular service, Sgt Evans was given the opportunity to move closer to his children when he was posted to Gibraltar on attachment to the Regiment. His worked alongside the Bandmaster as Band Sgt, he continued in the same role when he transitioned to the Reserves. In 2009, Sgt Evans cemented his name in Regimental history by writing the winning composition for the new Regimental Slow March “The Keys”, which can be heard as part of the Slow and Quick routine at the Queen’s Birthday Parade.

Sgt Daniel Gonzalez was also presented his VRSM, he joined the Royal Gibraltar Regiment Reserves as an Infantry soldier in February 2005. During his time with B Company Sgt Gonzalez has taken on a variety of roles. He has attended the Section Commanders and Platoon Sergeants battle courses in Brecon and has also gained qualifications in Skill at Arms, Physical Training, Range Management and Drill Instructing. Sgt Gonzalez has attended numerous camps both in the UK and Morocco assisting as an instructor for the attached Moroccan forces. 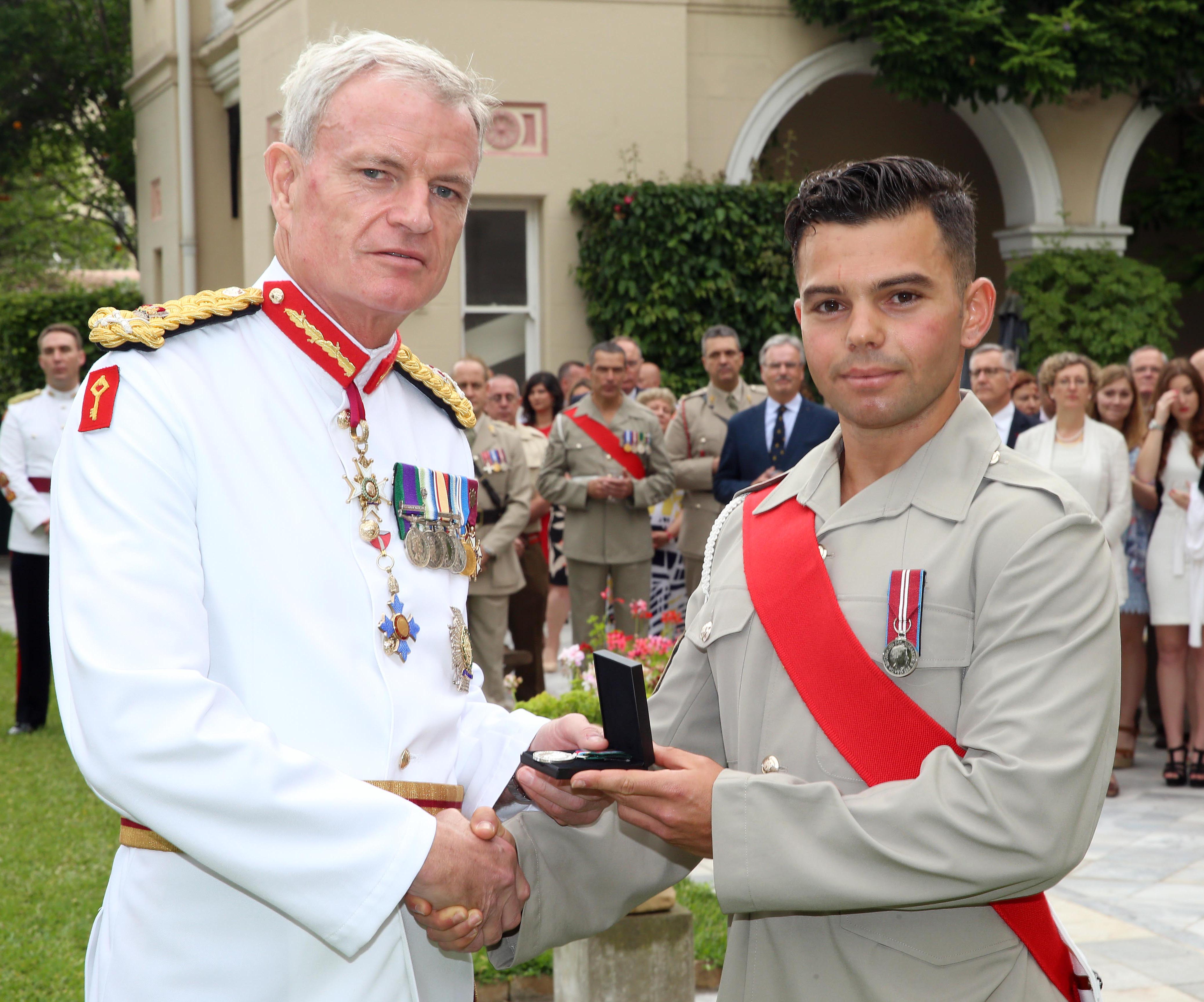 Lance Corporal (LCpl) Stephen Link was presented with his VRSM at the ceremony, he joined the Reserves in February 2005 as an infantryman. During his time with B Company LCpl Link has carried out different roles and has attended numerous training camps. He moved to the Signals Detachment in 2011 and after successfully completing his Signals Detachment Course in 2012 he was promoted to LCpl. 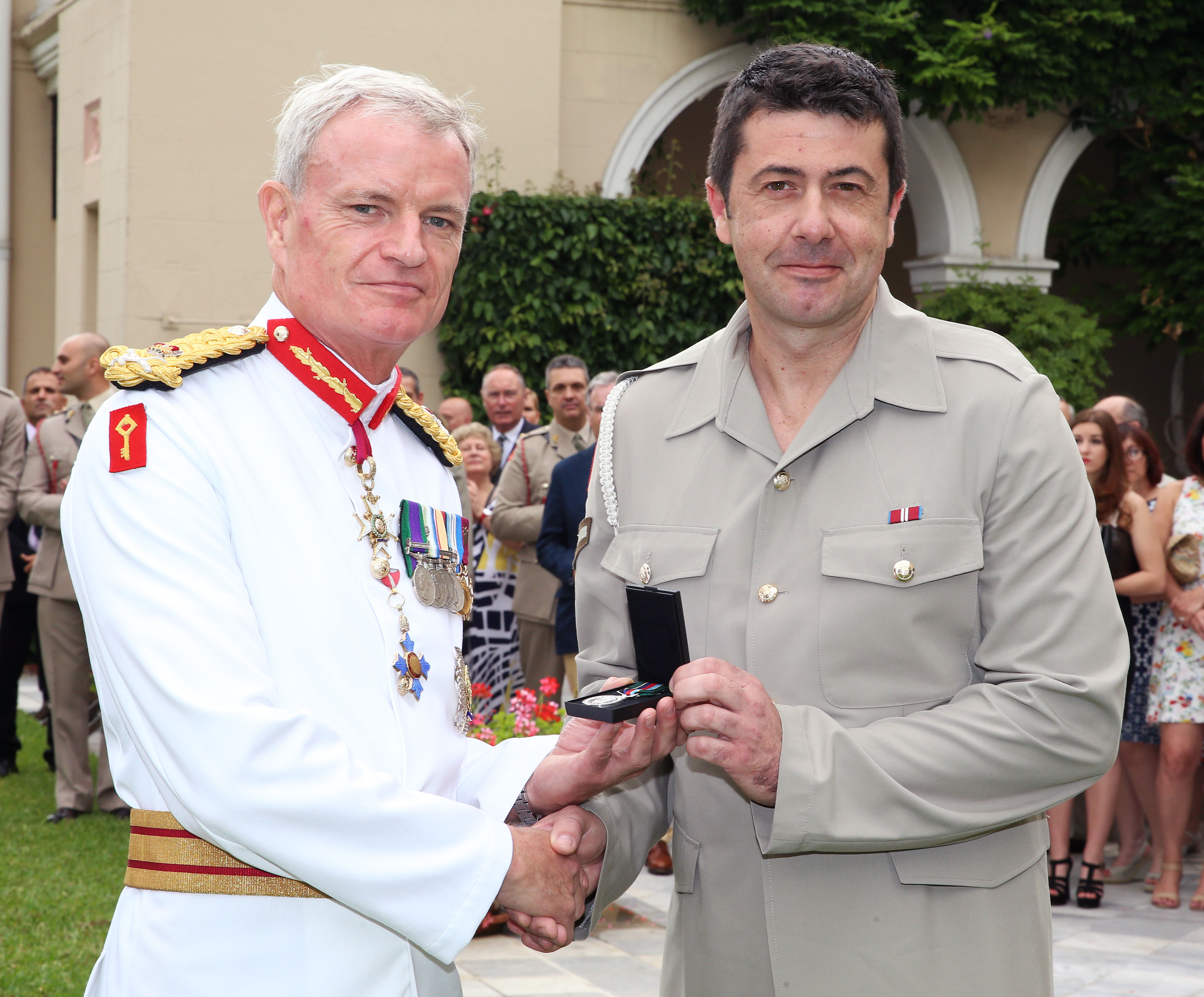 A VRSM was also awarded to Private (Pte) Gerald Fortuna who joined the Royal Gibraltar Regiment Corps of Drums in April 2005 as a musician. During his military musical career he has performed regularly both locally and abroad. He plays the bagpipes, bugle, fife and electric guitar He has performed during two tours of Morocco, as well as Ascension Island and various band camps in the UK including Gibraltar Day in London. The highlight of his career to date was when he was selected to pipe and escort Miss World, Kaiane Aldorino on her arrival back to Gibraltar. 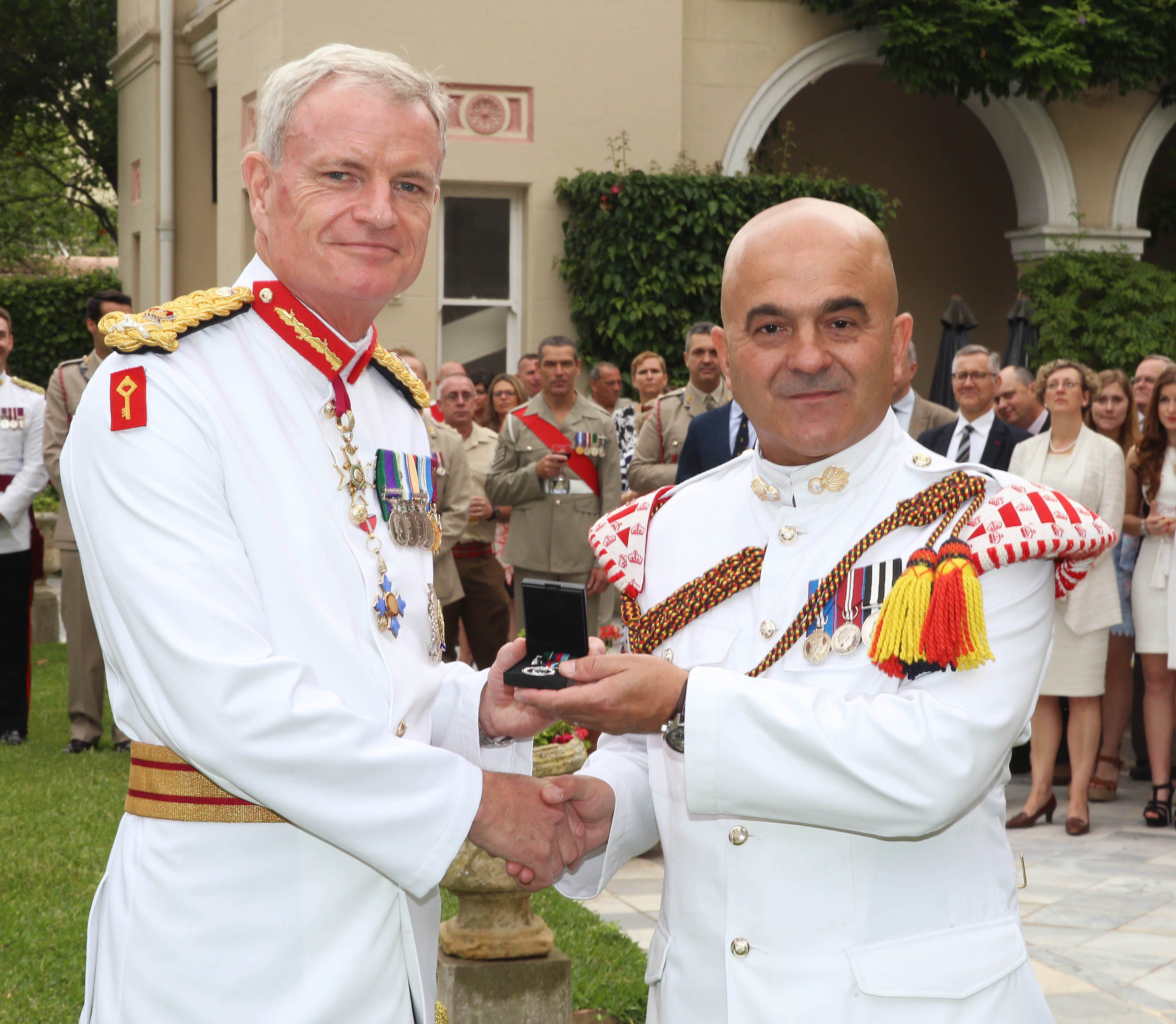 The VRSM Second Clasp was awarded to Corporal (Cpl) Damian Vasquez who joined the Royal Gibraltar Regiment Reserves in August 1994 as an infantryman. During his time with B Company Cpl Vasquez has carried out a variety of roles and has attended training camps both in the UK and Morocco. He was promoted to Cpl in May 2013 after successfully completing a number of Signals Courses. He is now the Signal Detachment Commander for B Company. 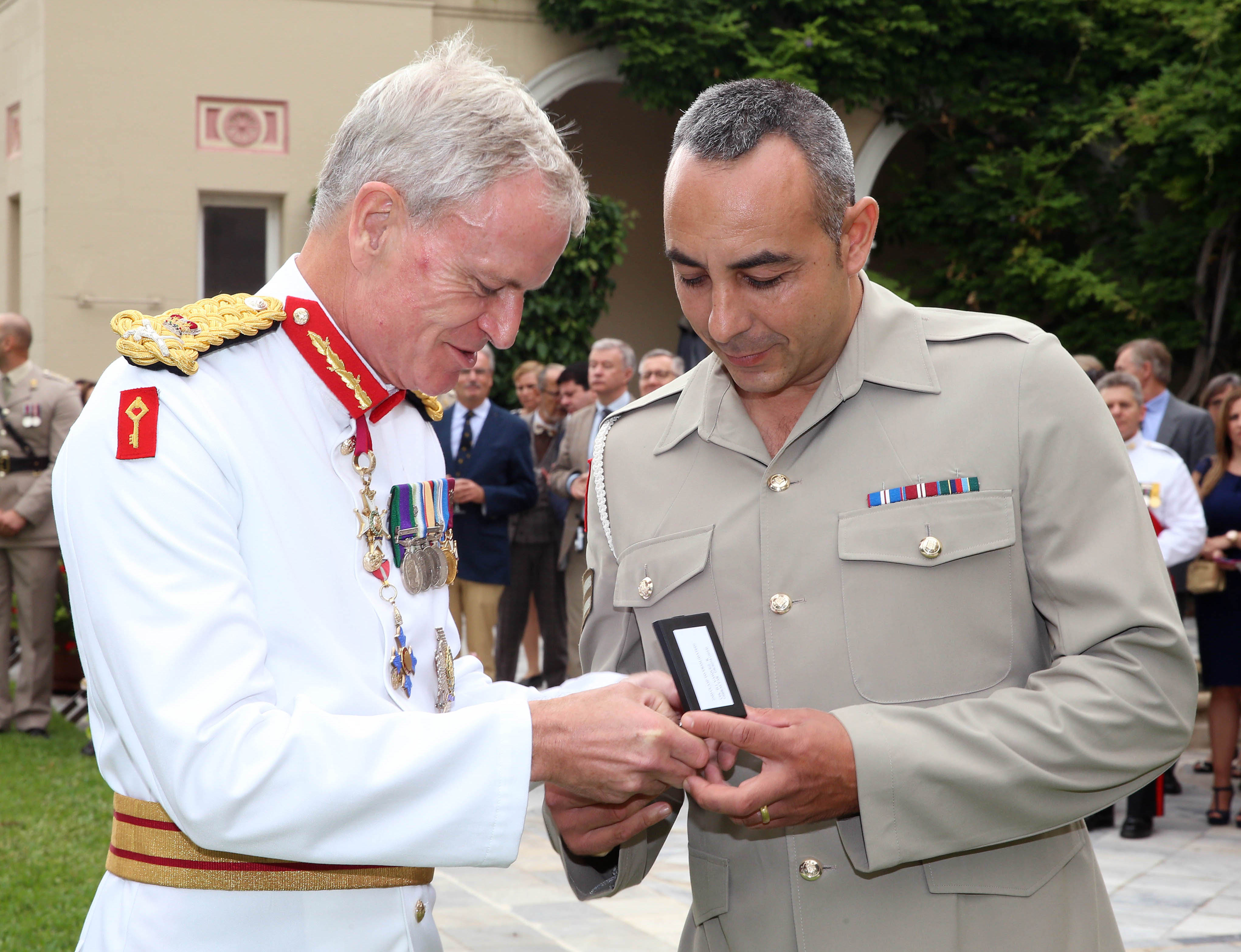