The clash between Kamsky and Vitiugov was hard fought but drawn, and allowed Short his chance to catch up with the erstwhile leader Vitiugov. He achieved this by inflicting a first defeat on Le Quang Liem of Vietnam after exploiting a small advantage well into the seventh hour of play. Short is more than twice as old as his victim but his stamina and determination remain undimmed by the passing years.

England number one Michael Adams was held to a draw by Spanish grandmaster Iván Salgado López and remains a point off the lead. The third member of England’s trio of top players, Gawain Jones, attacked hard against teenage Grandmaster Yu Yangyi of China but he met strong resistance and was defeated.

Three players are currently leading the chase for the £12,000 women’s prize. Nana Dzagnidze of Georgia, Anna Muzychuk of Slovenia and Zhao Xue of China all have six out of eight points. 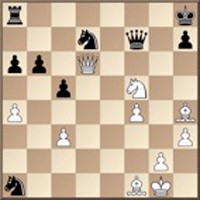 White to play - and make a big blunder!

The eighth round contained a rare example of a big blunder by a high-ranking grandmaster. All club players know how heartbreaking it is to miscalculate and ruin a game but it is unusual to see a top grandmaster make such a spectacular error. Mohammed Al-Sayed, on the excellent score of 5/7 and having played excellently in the game to reach a won position, thought he saw a beautiful finish, based on sacrificing his queen and using his two bishops and knight to checkmate the black king. So he played 1 Qxd7 and his opponent captured with 1...Qxd7. At this point  White realised that in the line 2 Bf6+ Kg8 3 Bc4+, Black’s king plays to f8 and will be perfectly safe. He had suffered a complete hallucination and had to resign. If instead of 1 Qxd7 he had played a move such as 1 g4, it is quite likely that it would have been Black, and not White, who would have resigned.

Round nine, the penultimate round, of the Masters takes place at the Caleta Hotel at 3.00pm on Wednesday afternoon.