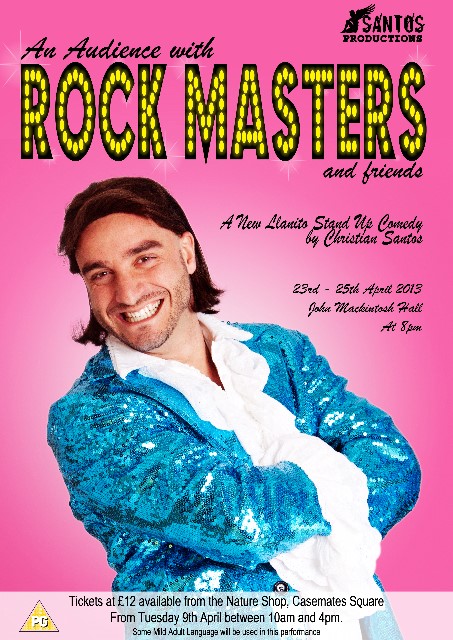 ‘An Audience with Rock Masters’  is the latest offering from Christian Santos, who together with Richard Mor are the writing partnership that also brought you ‘Los Super’ and ‘El Cuento’. This new production re-introduces the Character of Rock Masters who we saw in ‘Miss Llanita’ and ‘Gibbovision’ and also made an appearance in the GBC Open Day Prize Card Competition as the frustrated, over the top wannabe TV presenter who has two different personas.

Usually Santos Productions stages their Llanito Shows during National Week, which will also be the case this year as they are currently working on their next production, but this year producer Christian Santos decided to venture into a new project.

The show is very much a Stand-Up comedy show where Rock Masters gets to vent about his frustrations and situations that happen locally.  There will also be scenes where we get to meet new characters.  The format is very similar to a Variety Show where you get to know his character that little bit better with lots of videos and new musical numbers as well as some older popular songs that people want to hear again. This show came about having spoken to past audiences of Santos Productions' llanito shows.

Some of the most popular parts of our past productions have been the monologues by some characters talking about different situations that affect us Gibraltarians e.g The Eastern Beach traffic and getting our children ready for school in the mornings.  This new show sees Rock Masters give his hilarious insight and opinions on Parking and Communion Celebrations as well as all the local fads.   ‘An Audience with Rock Masters’ promises to be another off-the-wall and hilarious production that is sure to have you rolling in the aisles! So save the date and make sure you don’t miss what will surely be a fun-packed evening.

‘An Audience with Rock Masters’  will be staged at the John Mackintosh Hall from 23rd – 25th April at 8pm. Tickets at £12 are available now (Tuesday 9th April) from the Nature Shop, Casemates between 10 am and 4pm. Get your tickets soon to avoid disappointment.