The Perseid meteor shower is one of the most anticipated celestial events in the Northern Hemisphere. Though the “shooting stars” are already lighting up the skies in small numbers, the pace will accelerate around 11th-13th August, making them easy to view without a telescope from a dark site.

A statement from the Gibraltar Astronomical Society follows below:

At peak, (2am) hourly rate of the Perseids can reach 100 per hour although most observers under good skies will see closer to 50 per hour and half that from areas that are light polluted. To maximize your shower enjoyment, find as dark a site as possible.

Unfortunately, this year we have to add two factors into the equation that won’t make it as spectacular as last year’s and these are that we have a full Moon and probably an overcast night.

What Are The Perseids?

Meteors are particles of rock floating about in space released in the tails of comets, which are dirty rocky snowballs in orbit around the Sun. The Perseids are a result of the Earth flying through the same area of space that Comet Swift Tuttle (26 km wide) flew through in 1992 (the next time will be in 2126)

As each grain slams into the atmosphere at around 60 kilometres per second, it creates a supersonic shock wave that compresses and heats the air in front of it. This in turn heats the meteoroid white-hot and burns it to soot. At the same time, the grain's passage excites (ionizes) the air molecules along its path. When the molecules relax back to their previous unexcited state, they radiate light. Both the glowing, hot bits of comet dust and trails of ionized air are responsible for the familiar meteor streaks. The average width of a meteor track is about a meter, while the length spans tens of kilometres. Not only are Perseids swift, they are also famous for their fireballs!

History Of The Perseids Meteor Shower

The Perseids have been observed since at least AD 36 according to a Chinese record, but were not officially recognized as a recurring meteor shower until the late 1830s, when three European observers independently noted that an unusual number of meteors routinely appeared at the same time each August. Although their work led to the formal acceptance of the “shower”, they were not the first to notice their repeated appearances. That honour goes to German and English Catholics who for centuries called the annual August meteor display the “Tears of St. Lawrence”, after an early deacon of the church who was put to death by the Roman emperor Valerian on 10th August AD 258.

Where To Observe From

First find a dark area and allow your eyes to adapt to the dark environment, then look towards the North East, from any place in Gibraltar, away from streetlights and light pollution, and about 2/3 of the way up from the horizon to straight above. Grab a deck chair, if you are on the beach, and sit back and enjoy the spectacle that the Perseids Meteor Shower could be, and enjoy the show! The Full Moon will likely outshine the smaller, fainter meteors, but the temperate summer nights and consistently high rate of meteors make the Perseid Meteor Shower one of the best of the year for audiences all around Gibraltar. 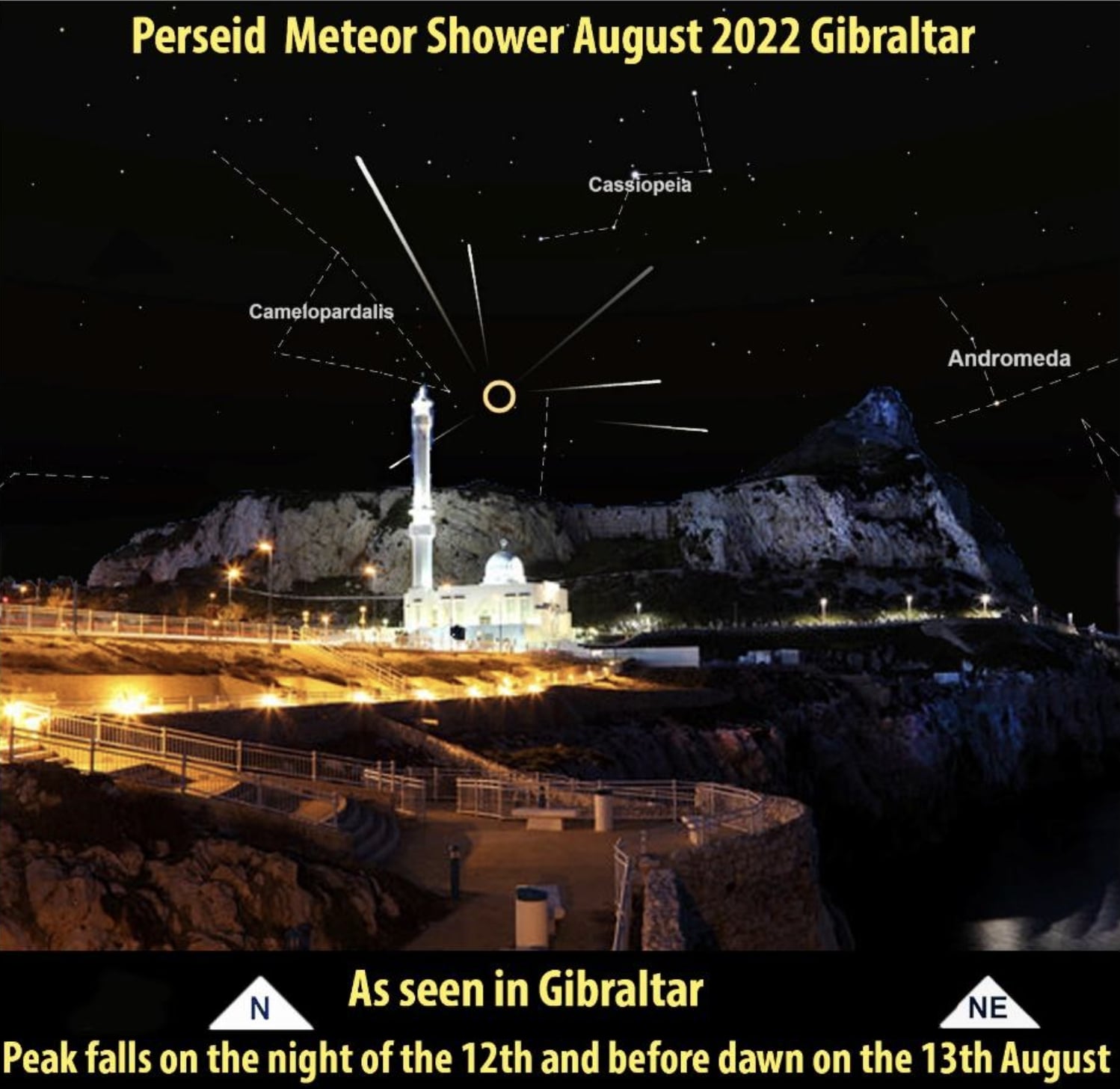