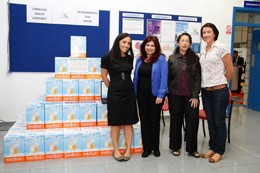 The Gibraltar Health Authority is featured in the latest edition of The Voice of American Society of Cytotechnology. The article, entitled, ‘ Moving Towards a Green, Lean, Healthcare System’ is written by GHA Quality Manager and Deputy Pathology Services Manager, Audrey Smith.

The article describes many of the initiatives taken by the Pathology Department, including the implementation of a paperless sample requesting and reporting system. Dr. Alex Menez, Pathology Services Manager, chairs the GHA’s Environmental Task Group, composed of members from across the GHA, which works to promote and implement environmental initiatives in the GHA. These include duplex printing, end of day default switch off of IT systems in designated areas, ink cartridge recycling and reducing energy consumption among others.

A Contractor will be undertaking works to demolish the ex-Fleet Pavilion buildings located between Queensway and Reclamation Road, as from today. Works will continue for 4 weeks.

The existing pedestrian access route through the area will be closed to the Public and an alternative pedestrian route will be provided to the south through the main car park site. Temporary information signs directing pedestrians will be in place. Parking spaces along Reclamation Road by the location of the works will be temporarily suspended as necessary.

The GRA has today issued a Direction to providers of publicly available telephone services, in order to address call routing problems that are affecting former CTS customers. The Authority states that a number of complaints have been received from ex customers of the telecommunications provider, particularly those using mobile services. regarding receiving international calls.

The GRA understands that the issue is due to the fact that international operators, including those providing roaming services, are still trying to route calls and texts through the non-operational CTS switches.

2 persons arrested for Possession of a Commercial Quantity of Tobacco